How Rudolph Got His Red Nose 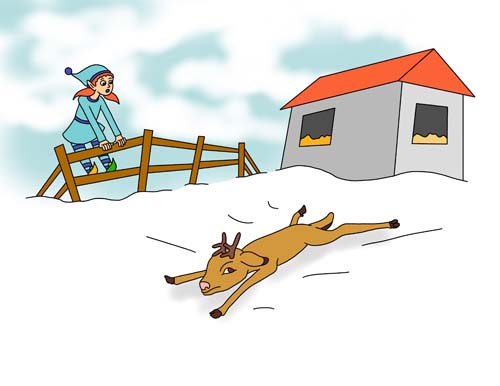 I was standing with Highstep, the elf in charge of the reindeer, watching Rudolph playing with some of the younger reindeer, when I asked, “Remember when he was a newborn and we first gave him red fairy dust to see if he could fly?”

“I sure do! All he wanted, was to be on your team with Donner, his daddy.”

“You had been giving him a pinch of red fairy dust for five days, and he tried so hard to fly! He just never got the hang of it,” I said.

“No, he didn’t. I gave up on him ever being able to fly. Then Lyra decided to help!”

Eighty years ago, in 1939, Lyra had gone to the pasture where the young reindeer usually play. She heard about Donner’s new son Rudolph, and was excited to see if he was flying.

Rudolph was easy to spot. He was climbing up to the top of a small shed. At the top, he jumped off, and fell into a snow drift. Lyra watched while he jumped off the shed at least 10 times!

Lyra began feeling sorry for him. Then she recalled the time she saw the Neverland Fairies deliver a bag of dust that she mistook for sprinkles. Bernard, the head elf, and I told her that we give the reindeer red fairy dust so that they can fly.

“If Rudolph got just a little more fairy dust, he might be able to fly and join the team with Donner,” she thought. Then she whispered to herself, “I think this is the day the fairies deliver dust to Santa. Maybe I can get some for Rudolph.”

She headed for my office in the administration building, hoping she might catch the fairies delivering the dust. She noticed two fairies carrying a bag just outside the door and asked them, “Is that Santa’s red fairy dust?”

“There is a new reindeer that is learning to fly and he needs to get some dust right away.” Walking toward the fairies, she continued, “If you give me the bag, I will take it to Santa and Highstep for the new reindeer.”

“I don’t know about that. We were given specific instructions to make sure the bag of dust gets into Santa’s safe.”

“But if you let me take it to him, you will save Santa from having to come over to his office and walking back to the stables.”

“I guess that would be okay, as long as you are sure you will take it right to Santa and the reindeer.”

The fairies gave Lyra the bag and flew off. She headed back to the pasture with a grin, pleased with herself for what she was about to do.

She put the bag of dust on the ground, and reached inside her backpack for a teaspoon.

While looking for the spoon in her backpack, she did not notice that Rudolph opened the bag and poked his snout inside.

Finding her spoon, Lyra looked up and said, “Rudolph, I have some fairy dust and want to give you an extra spoonful to see if it will help you fly.”

She reached down to pick up the bag of dust she placed on the ground and let out the loudest scream you have ever heard. It was so loud that Highstep and I came running out of the barn.

“What’s going on out here? Is everyone okay?” I asked.

“What do you mean? Where is Rudolph?” I asked. “Did something happen to him?”

“Santa, I watched Rudolph trying to fly and felt bad that he was not able to. I remembered what you told me about the red fairy dust when the fairies came to deliver a bag to you. I was going to give Rudolph a spoonful, and . . . well, by the time I finally found a spoon, Rudolph had eaten the entire bag of dust!”

“He ate the whole bag?!” I looked at Highstep and continued, “Have you ever given a reindeer that much fairy dust?”

“Never!” Highstep said. “I have no idea what happens when a reindeer eats that much.”

Just then, I saw a bright light up above the barn, and asked, “Can anyone see what that is up there. It’s like looking into the sun, it is so bright.”

Highstep stood about 5 feet away, and said, “Come over here Santa. From this angle you can see what, or I should say, who it is.”

“What do you mean who?” By the time I asked I was next to Highstep and could see what he meant. There was Rudolph, flying high over the barn. And that light I saw? It was Rudolph’s nose!

“So now thanks to Lyra, Rudolph is able to fly,” Highstep said.

“Yes, he can, but he also has a nose that glows red all the time!” I stated.

“It does, but you like having him around on those foggy nights to help you see, don’t you?”

“I do like that, and we learned to be careful not to give a reindeer too much fairy dust. But I’m not so sure Lyra learned her lesson about doing things without checking with us first, even though this time she actually did help.”

Note from Santa: The original story (“Flying High“) about Lyra and the red fairy dust was posted on July 29, 2019