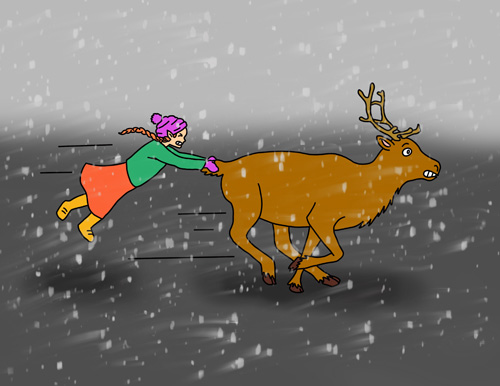 “That’s quite a storm outside,” Ms. Claus said as we sipped our hot chocolate and shared a piece of apple pie.

“It is pretty bad, but not as bad as the time we thought we lost Sachi,” I responded.

“How could any of us forget that day! But in the end, it worked out pretty good for you, Santa.”

“You are right about that,” I said sitting back in my easy chair.

Several elves screamed, “Duck Santa,” and I bent over just in time to have a snowball miss me by inches.

Over all the gasps from the elves, I heard one say, “Sorry Santa! I wasn’t aiming at you.”

I smiled and waved my hand to show that I was okay, and not upset about the close call. After all, the elves and reindeer were just out having some fun.

Just then, Bernard came running out of the entrance to Santa’s Village with a megaphone and announced, “Attention everyone!” And then pointing to the West he continued, “There is a blizzard heading our way and, we all need to get back inside before it gets here.”

All the elves quickly picked up their belongings and headed inside. The last one came in just as the snow and wind picked up. All anyone could see was white, as if someone had put a sheet over the entrance.

I started walking down the tunnel towards the village when I heard, “Has anyone seen Sachi?”

Stopping, I walked back to the entrance where Bernard was. I could tell from all the gasps and looks that Sachi did not make it in.

“Bernard, we need to call Polar Pete. He is the best tracker in the North Pole,” I yelled above the howling of the storm.

“One of the big reindeer must have gotten spooked and dashed off,” I responded, looking to see who it was.

“Well I’d rather concentrate on getting Sachi back inside where it is safe, and not worry about some scared reindeer,” Bernard responded agitated, shaking his head.

As Bernard and I made plans to find Sachi, I noticed all the elves pointing to the entrance. Looking toward the end of the tunnel, still blanketed in blowing snow, I asked, “Is that a reindeer coming in from the blizzard?”

“It is Santa. And look what is behind him,” Bernard replied nodding his head toward the entrance.

Taking off my glasses and rubbing my eyes, I could not believe what I saw. With the snow swirling near the entrance, the reindeer became completely visible as he entered the tunnel. Holding onto his tail was Sachi!

As the elves cheered, I cried out, “Highstep, would be so proud! That reindeer dashed out into the blizzard, not thinking twice about his own safety.”

“He sure did Santa, and he found Sachi and brought her safely back inside.”

“You know Bernard, I have never seen a reindeer move that fast from a dead start.”

As everyone was congratulating the reindeer for his heroics, Highstep, the elf in charge of reindeer, came running up the tunnel. Nearly out of breath after running over from the barn, he said, “I just heard about an elf lost in the blizzard. What can I do to help Santa?”

“Thanks to that reindeer,” I said pointing in his direction, “the elf has been found. Have you been working with that reindeer?”

“I have, and he has been making some of the Mail Sleigh runs to pick up letters from the children. Why do you ask?”

“Well, without even thinking about what might happen to himself, he dashed out into the blizzard, found Sachi, and brought her safely back inside. He was so quick; all we saw was a blur, and it felt like someone turned a big fan on for a few seconds.”

“I’ve been noticing that sleighs get up off the ground faster when he is on the team,” Highstep added.

“Well, after what we all just witnessed, any reindeer that quick and willing to risk his own safety to help someone else should be part of my team. Highstep, can you work with him? With his quickness, I think he should be in the front, right next to Dancer.”

“I’ll do that. He will make a great addition to the team.”

“If he doesn’t have a name yet, I think we should call him Dasher, to remind us of today.”

Moving toward Dasher to thank him, and tell him of my decision to add him to the team, I felt a little tear of joy roll down my check as I watched Sachi give him the biggest hug.

As I thanked Dasher an idea came to me. “Sachi, you know because of what Dasher did today, I am putting him on my team for Christmas. As a member of that team, he will get an elf to help care for him, and I was wondering if . . .”

Sachi broke in shouting, “YES, YES, YES, I would love to be his caretaker!”

“Well it’s a done deal then. Highstep will get you both set up in the main barn.”

Smiling from the memory, I placed my empty cup in the sink, and turned to Ms. Claus, “You know Anya, I’m always amazed at how something that might be really bad, can turn out to be a truly good thing.”

“You are so right Santa. You could have lost a good elf to that storm, but in the end, you gained a very faithful member for your team.”

“I did, and Dasher got a caretaker who loves him very much!”