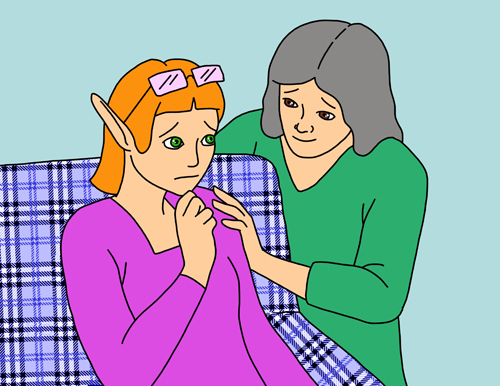 Approaching her office in the mailroom, Ms. Claus noticed someone hidden by the shadows in the corner of the hallway. “Can I help you?” she asked.

“Temperance, is that you?”

“Yes ma’am,” the elf responded as she moved into the light.

“I definitely didn’t expect you here at this time of day,” Ms. Claus responded grinning. “Usually you’re helping other elves solve their differences. What brings you to my office?”

Unsure how to reply, Temperance dropped her eyes. “That’s just it Ms. Claus, I don’t think I can do that anymore.”

“What!” exclaimed Ms. Claus. “Your skills at listening and resolving problems have made the North Pole a better place. Why do you want to stop?” About to say more, Ms. Claus noticed the painful look on the elf’s face and knew something was very wrong. “Tempe, would you like to talk about it over some tea in my study where it’ll be more private?”

“Thanks Ms. Claus, that would be great,” Temperance replied trying to smile.

Slipping an arm around Tempe, Ms. Claus gave her a hug as they proceeded toward the study. “Seems like you are carrying quite a burden today, so let’s see what we can do to lessen it. Maybe we should invite Santa to join us.”

Temperance stopped and gave Ms. Claus a tearful look. “No, just you. I don’t want to disappoint Santa.”

“I see,” Ms. Claus whispered as they arrived at her study. Opening the door, they both entered. “Make yourself comfortable Tempe while I make us some tea.”

Once brewed, Ms. Claus poured two mugs of steaming tea, set them on the table, and then placed the teapot on a hot plate. “To be honest with you Tempe, I can’t imagine what is so horrible that you want to give up?” Settling into her chair, Ms. Claus wrapped her hands around the mug and waited.

Unsure, Temperance began asking questions. “Do you and Santa ever have disagreements? When you try to settle them, do you quarrel with each other? Did you ever have someone talk behind your back and then …”

“Slow down Temperance,” Ms. Claus said, “one question at a time.”

“Sorry Ms. Claus, I am so frustrated and sad that I don’t know where to start,” the elf cried as tears began to trickle down her cheek.

Reaching over to pat Temperance’s arm, Ms. Claus suggested she take a breath while she attempted to answer her questions. “Yes, Santa and I do squabble with one another on occasion, but we try…”

“You do?” the elf blurted aloud, breaking Ms. Claus’s response. “But you always appear ….”

“Relax, Tempe, and let me finish. I was about to say, that we always try to settle our differences. When we can’t, we agree to think about what each other said and come back later to talk some more. And we definitely avoid talking behind a person’s back. If we have a problem with someone, we try to talk it out directly with them. Now what’s really bothering you Tempe?”

Pausing, Ms. Claus waited and then prodded Temperance to continue. “Tell me what happened so that I can help you,” she urged.

After wiping her tears away, Temperance took a sip of tea. Looking at Ms. Claus, she apologized and began her story. “Cocoa and Toto were arguing two days ago while making dolls. Patches, who manages the Doll Workshop, called me to help her two best workers settle their differences.”

“When I arrived, both of them were saying awful things about one another. Patches had to step in between them when they began to shove each other. She led them to her office, and I followed. When we arrived, she told them, ‘We are not leaving this office till you settle your differences. Since both of you trust Temperance, I invited her to help.’”

“I thought I did. They thanked me and we all hugged each other before they left,” explained Temperance. “But then today while I was in the restroom by the Doll Workshop, I overheard them complaining about how I was always called in to fix arguments when it’s really none of my business.”

“Well that wasn’t nice at all,” remarked Ms. Claus, shaking her head, “especially since Patches called you in to help them.”

“That’s not all,” continued Temperance sadly. “They began to criticize what I said to them and even made fun of the way I talked and acted. I was shocked and hurt, so I stayed in the stall till they left. I came to see you because I didn’t know what else to do. If the elves truly feel that way, then how can I help them settle their differences? I don’t want to be a go-between anymore.” Unable to control her feelings, Temperance began to sob. “I just wanted to help, not hurt anyone.”

Knowing that it was best for Temperance to cry herself out, Ms. Claus paused and refilled her mug. Getting up from her chair, she sat next to the elf and slipped an arm around her. As the elf snuggled against Ms. Claus, the tears began to lessen.

“I’m sorry Ms. Claus,” she whispered after blowing her nose and wiping her eyes. “I must look a mess. I guess I just needed a good cry.” Sitting straight, Tempe brushed her hair away from her face and looked at Ms. Claus. “You must think me silly and immature.”

“Not at all,” replied Ms. Claus as she returned to her chair. “When our feelings are hurt, sometimes we just need to cry. So tell me Tempe, how can I help?”

“Do you think all the elves see me the way Cocoa and Toto do?”

“If you are worried,” Ms. Claus explained, “then maybe you shouldn’t be a go-between.”

Shocked, Temperance leaned over the arm of the sofa and stared at Ms. Claus. “Do you really believe that?”

“Not really, but if that’s how you feel, then maybe you need to think twice about helping others. After all,” continued Ms. Claus as she watched the elf’s face change, “it’s hard to deal with people or elves who are mad. Many times, they will say things during or after a quarrel that they really do not mean. In this case, I think they both picked on you as a way to let off steam. They might have also been embarrassed about how they acted. It’s much easier to criticize someone else than accept that you were acting badly. Unfortunately, you overheard them. Now you don’t know what to do and are starting to doubt yourself.”

“I guess,” mumbled Temperance. Unsure, she picked up her mug and began to sip the tea. “But I thought I was helping,” she said suddenly, “but maybe I wasn’t or they took it the wrong way.”

“That’s a possibility. Maybe they did not realize you were just trying to help them.” Reaching over the arm of her chair, Ms. Claus took Tempe’s hand and added, “You know you have to settle this, and facing them is the solution. Of course, since it involves yourself, it will be a challenge, and yes, your feelings may get hurt again, but Tempe you know what to do.”

Smiling Temperance said, “I know,” and reached over to give Ms. Claus a hug. As the elf stood up, she turned and smiled. “Thanks for putting up with my tears and sadness. I see why you and Santa get along. You don’t give up and you try to listen to one another.” With that said, Temperance quickly headed for the door.

“I think I got this. Love you,” she cried, giving Ms. Claus a wink and closing the door behind her.

To read more about Temperance please check out: When Tempers Flare At The North Pole, which was posted on August 12, 2019;