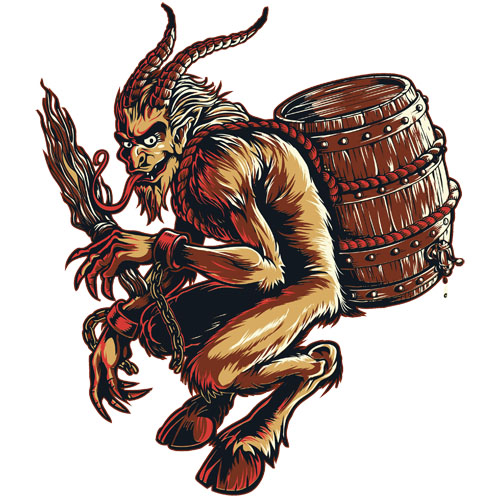 Heading to my office, I knew I would have to pass the dining hall, where Doheny was making cookies. I pinched my nose as I approached the door and walked a little faster so that I couldn’t be tempted. Just as I passed the door, I stopped suddenly as I heard the conversation going on inside.

Standing just to the side of the door, I listened as an elf stated, “In addition to Krampus being half goat and half demon, he has devilish horns, a snake-like tongue, and is covered in fur!”

“That might be true, but I heard,” another elf responded, “that his arms and body are strung with chains and bells, and he carries a large basket on his back to cart off bad children. He’s evil.”

Having heard enough, I took a step inside saying, “What’s all this talk about Krampus?”

The six elves seated at a round table looked at me with glazed expressions on their faces. Sully was the first to recover from the shock of seeing me. “We were just talking about Krampus,” he responded, “and what he is like.”

I walked over to the table and took a seat in one of the two empty chairs. “The legend of Krampus began in and was limited to Austria and the Alpine region for many centuries,” I stated, “but now it seems to be spreading all over the world.”

“Does he really exist?” Peppermint shouted, wanting to be sure I heard her.

“Many believe he does,” I explained as I continued to discuss the issue with the elves at the table. “In fact, some countries actually celebrate Krampusnacht, which is German for Krampus Nights, on December 5th each year.”

“That’s the night before you begin your deliveries to Belgium and the Netherlands for Christmas,” Tutu remarked surprised.

“You’re right. Myth has it, Krampus strolls about town on that night, checking on little boys and girls, and dishing out lumps of coal to those who have been bad,” I remarked, shifting forward in my chair.

“But you don’t give coal out to those being mean,” Hanfin insisted.

“No, I don’t, but because of Krampus, I’ve gained the reputation for doing just that,” I responded sighing.

As Hanna leaned over the table, she dropped her voice to a whisper and remarked “I heard that you could also be swatted with a birch branch.”

All the elves looked at her shocked as Snickers added, “That’s if you are lucky! Others end up in the basket on Krampus’s back where worse things can happen.”

“No need to hesitate. You can ask me anything you want. What’s your question?” I stated in a calm voice.

“I was wondering if the elves had heard that tale.” Leaning back in my chair, I collected my thoughts and said, “I try to prevent anyone from punishing a child in any way for anything!”

“We know that, Santa!” Hanfin was quick to say. “That’s why I think everything about this Krampus is bogus.”

All the other elves mumbled and shook their heads not sure what to believe. Finally, Sully spoke up, “Christmas time is a special and merry time of the year. Why would anyone want to have a mean creature lurking about?”

Thinking the issue of Krampus was settled, I began to push my chair back from the table when Hanna asked, “I was wondering Santa, if Krampus was real and you met him, what would you do?”

“Hmm, that’s a good question,” I began, as I stood and walked around the table. “Of course, the first thing is that I would remind myself of the Golden Rule.”

“Do unto others as you would have them do unto you,” the elves exclaimed in unison.

“Correct! When you do that, many times people will respond nicely. However, if I met Krampus, I would look him in the eye, stand straight, maintain a comfortable distance, and project a friendly confidence.”

“I don’t think Krampus would know what to do,” Snickers stated as he looked over his shoulder to see me. “How would you react if he got even meaner? Would you be mean back to him?”

“Do you put a fire out by adding more logs?” I asked, not expecting an answer. “I would respond only with kindness. After all, the calmer you act, the easier it is to resolve a situation.”

As the elves nodded in agreement, Tutu spoke up, “I’ve always been told how important it is to listen.”

“You are a wise one Tutu,” I responded. “Too many times people will interrupt each other because they want to talk. You need to listen to what a mean person has to say, and think about what he or she is saying, before responding.”

“Listening helps you understand why they are being so nasty,” Tutu added.

Giving the young elf two thumbs up, I continued. “When you do respond, you need to speak honestly in a clear, calm voice.”

“I almost wish Krampus did exist!” Sully exclaimed. Shocked, all the elves glared at him. “What? All I meant was that if he did exist, and Santa met him, I bet he would change his ways.”

“I agree,” I said before another elf could respond. “I would much rather help someone become a better person. There is good in everyone. Besides, sometimes things go wrong which can make them unkind. If we ignore disagreeable people, we’ll miss out when they decide to share their good side.”

“Though I can’t believe Krampus could have a good side,” giggled Hanna, “I like your advice Santa and will try to always look for the good in someone, even Krampus if I ever meet him.”

As all the elves at the table laughed and got up to leave, I felt proud of their willingness to listen to my story and understand the need for kindness, even towards those who were the most despicable. In my experience, they need it the most.