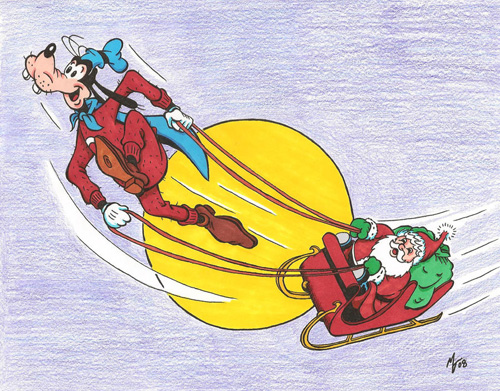 Entering my office, Bernard saw a blanket stretched over my table and sofa with a small light underneath. “Santa?” he called out. When he heard no answer, he scratched his head and walked over towards the makeshift tent.

Lifting up a corner of the blanket, I looked out to see a dumbfounded Bernard standing there. “Ho, Ho, Ho! Bernard, come in and join me.”

Unsure what to do, Bernard got on his knees and crawled under the blanket. “Why are you wearing your reindeer pajamas?” he asked, startled by my appearance, “and what are you doing in here? Are you OK?”

“Of course, why wouldn’t I be? Have a cookie?” I asked holding a plate out for him.

“Uh sure, I guess,” Bernard responded a little surprised.

“What can I do for you today?”

“Well, I came by to remind you about the meeting with all the workshop supervisors to discuss production start-up for 2022.”

“I totally forgot. We should get going,” I said as I finished my cookie and crawled out of the tent.

“Sure, why not. I’m comfortable, don’t you like them?”

“They’re nice,” he answered while we made our way down the hall.

“What’s up with Santa?” they whispered. Though I pretended not to notice, Bernard shrugged his shoulders while he continued to follow me.

Reaching the conference room, I opened the door and announced, “Welcome everyone. It’s nice to see everyone.” Keeping a serious face, I watched as the supervisors began to laugh.  Holding a finger to his lips, I noticed Bernard shake his head. Suddenly, all of them sat down in silence, watching me as if they didn’t know who I was.

“Let’s have some fun!” I exclaimed, sitting in my chair. I began removing my shoes and socks, and tried not to smile. “Today we need to relax, so let’s begin by doing away with shoes and socks,” I declared.

Looking at each other strangely, the elves shrugged their shoulders and did what I asked.

I immediately cut him off as I threw my socks on the table, “Come on now. Everyone get those socks off and throw them in the middle of the table.”

“OK, if that’s what you want Santa,” Bernard replied giving me a confused stare, while the pile continued to grow.

Once the elves had their socks off, I stood and motioned for all of them to stand as well. “On the count of three, everyone grab a sock and put it on your right foot, then grab another and put that one on over the other one. We will keep going until all the socks are gone and the elf with the most socks on wins.”

Being fun-loving elves, their faces turned from confusion to excitement as they prepared for the competition.

While they wiggled to get an advantage over those next to them, I yelled, “One, Two, Three, Go!!”

Scrambling to grab a purple sock, Patches screamed, “Remember, one sock at a time!” when Fizzlepop tried to steal two.

Everyone laughed and shouted when getting one sock on over another became more challenging. Finally, Clunker grabbed the last sock from the table.

“You have to be able to get it on for it to count,” I informed him.

Once Clunker pulled on the last sock, I shouted, “Okay, take the socks off and count how many you have.”

Several elves hollered out ‘Three’ as they took them off. Then Needler roared, “I’ve got four!” After a few seconds, Parlor yelled, “I got that beat,” and held up five socks.

“Looks like we have a winner, thanks for playing,” I responded. The elves began gathering their own socks to put them back on when I announced, “Today I think we just need to have some fun. Take the day off and we will meet here tomorrow to discuss production.” I then left the room before they could say anything.

From there I headed to the dining hall. When I sat at my favorite table by the fireplace, Hannah came up and asked, “What can I get you for lunch Santa?”

“A large bowl of snow, a scoop of vanilla ice cream, and some cherry syrup.” After a slight pause I added, “Oh and an extra bowl and spoon.”

“I heard what you said. I just don’t understand why you want that.”

When Hannah returned, she placed all the items on the table. Sitting down, she watched as I scooped half the snow into the empty bowl. Adding the ice cream, I covered it with the rest of the snow. After packing the snow tightly around the ice cream with my spoon, I poured cherry syrup over it and began eating.

“Have you ever had an ice ball with ice cream?” I asked Hannah. As she shook her head, I pushed the bowl in front of her and handed her the spoon. “Make sure you get some of the ice cream.”

Hannah slowly took a spoon full of the concoction and placed it in her mouth. Her frown quickly turned to a big smile. “Oh my! That’s wonderful!”

“I knew you’d like it. One of my J.A.T.S. (Jolly Assistants to Santa) from Kentucky told me about this.”

“I have to tell Blanch. Maybe we can have this as dessert for everyone!” Before I could respond, Hannah disappeared into the kitchen.

Finishing my sweet treat, I got up and turned to leave and found Ms. Claus standing behind my chair. “Hi dear,” I said giving her a hug. “Didn’t see you there. I was just on my way to take a ride on Blitzen.”

“In your night clothes,” Anya asked.

Looking down at my pajamas, I smiled. “Why not. Times a ‘wasting,” I said politely and walked around my wife.

While Ms. Claus watched her husband head towards the reindeer barn, Bernard, Clunker, and Wheelie approached her. “What’s up with Santa?” Bernard remarked. “He’s not making any sense today.”

“Besides,” Wheelie wanted to know, “why is he still in his pajamas?”

Ms. Claus giggled. “Seems he read something about today being National Goof-Off Day in America,” she replied, “so he decided he should celebrate.”

“That explains it,” laughed Bernard. “We’re used to him taking the business of the North Pole seriously and forgot that Santa has a fun-loving side.”

“I guess he deserves a break,” chuckled Wheelie, “to let that Jolly Old Elf out.”

“Good thing today only happens once a year,” Ms. Claus said motioning for Hannah to return to the table. “In the spirit of goofing off, why don’t you join me and have an ice cream snow ball?!”

I hope you enjoyed today’s story. I will post another one on April 15th. If you have any comments or if there is something you would like me to tell you about, please feel free to leave me a comment. Until next week . . .

To read more about J.A.T.S. please check out:

Illustration from Deviant Art by zombiegoon