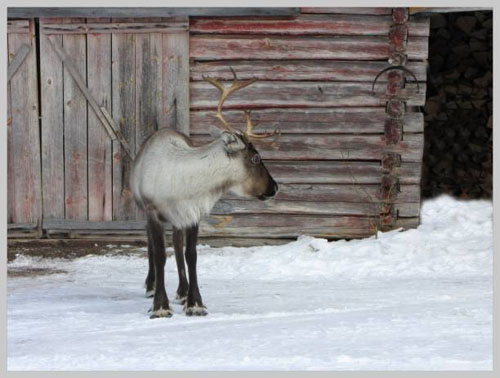 After our meeting, Carter, the mailroom manager, and I headed outside to check on the sleighs and reindeer that transport the mail. As we walked past the paddock, I stopped. “Do you smell that?” I asked tilting my head back to get a better whiff.

Carter sniffed several times as he turned his head in various directions. “All I smell is the scent of reindeer manure and hay.”

Shaking my head I said, “It’s probably nothing. Let’s head over to the barn.”

Coming close to the entrance, I stopped for a second time. “There it is again! Surely you can smell it now.”

“I do!” Carter exclaimed. Pinching his nose to avoid the smell, he added, “That’s horrible! What is it, Santa?”

“The smell of spoiled dirt and sulfur can only mean one thing!” I paused as I turned, sniffing in all directions to see where the scent was strongest. “Malodor!”

“It has to be him. His scent is a sure give away. Ever since I chose elves to help me instead of Gremlins, he only comes around to cause trouble for us.”

While nervously searching the area with his eyes, Carter asked, “What should we do, Santa?”

“Run back to the administration building and tell Bernard to get over here pronto and to bring Fizzlepop and Quentin with him,” I instructed the elf.

Waiting for the team to arrive, I looked around the pasture to see if I could find any signs of the little Gremlin.  It wasn’t long before I noticed the elves running along the fence line on the other side and turned around to meet them.

“I’m sure. I can smell that varmint anywhere! Malodor is here somewhere,” I insisted. “When checking the corral, I noticed that his foul stench increased the closer I got to the barn. He has to be in there!”

“You and Quinten enter through the North entrance.” Then turning to face Bernard and Carter, I directed them to the South entry. “I’ll take the side door. But remember as you move toward these access points, search every square inch. If you find him, be sure to holler.”

Everyone gave a thumbs up and progressed toward their assigned opening. As I approached the side door, I looked behind me and away from the barn just in case the Gremlin had made his way outside. Once I reached the doorway, I turned the knob and pulled, making as little noise as possible.

Sticking my head inside, I surveyed the area until I was sure it was safe. Sneaking inside, I closed the door behind me. A loud creaking sound startled me, then I realized that it had come from the old door and waited for the silence to return.

When it did, I listened for movement around me. Hearing nothing but the calm stillness of the reindeer barn, I moved forward to the tack room on my right. Entering, I tested the air with a quick sniff to see if I could detect Malodor’s scent. Nothing. Just to be sure, I circled the room, checking behind the harnesses and reins, but avoided touching any of the bells for the sleighs. Nothing was out of place.

Meanwhile, Quinten and Fizzlepop approached a couple bales of hay and a sack of reindeer feed next to Donner’s stall. Noticing how the scent became more intense, Quinten asked, “Can you peek around the hay to see if Malodor is in there?”

“All I see is Donner lying in the corner, but the rest of the stall is empty.”

On the other side of the barn, Bernard and Carter thought they spotted a shadow moving across the aisle into Vixen’s stall. Following it, they detected that the stench grew stronger. Peering between the slats of the gate, Bernard shook his head and smiled, “The shadow we saw was just Vixen walking over to get a drink from her trough.”

“Humm,” Carter responded, sticking his head into the stall. “There’s something familiar about the smell. Do you really think it’s Malodor?”

“I certainly trust Santa to know. After all he has had several encounters with him. Let’s keep searching.”

Though I had heard the elves whispering, none of them had sounded an alarm, so I continued hunting for Malodor. Leaving the tack room, I was hit with the strong smell of sulfur. I knew he had to be close. Then I heard a loud thud from Cupid’s pen next to me. Stooping as low as I could, I slid along his stall. When I got to the gate, I leaned my back against the wall and just listened. In addition to the stench, I could hear a lot of rustling, more than one reindeer would make.

Inching myself up the wall, I reached for the gate. Pulling it open, I jumped inside and hollered, “Gotcha!”

My face must have been as red as my Christmas suit when I realized that in the stall with Cupid was Highstep.

“What in the world are you up to, Santa?” my reindeer manager yelled.

Placing my index finger on my lips, I hissed, “Be quiet. We think Malodor is in the barn somewhere.”

Highstep whispered in my ear, “How do you know that?”

“Can’t you detect that sulfur stench? I know Malodor’s scent when I smell it. He has to be here somewhere.”

Just then all the other elves came running up to Cupid’s stall. “We heard you holler ‘Gotcha’ and figured you caught the Gremlin,” Bernard shouted. “Where is he?”

“Well, my friends, I was just about to explain to Santa, that the stench is not from Malodor. Follow me.”

As the elves and I walked with Highstep toward the indoor reindeer paddock, Quentin demanded, “If not, then what is it?”

“Well, it seems that last night after the elves had their yearly Big Bean Bash, no one thought about cleaning the pots used to make the different beans and left them here,” Highstep explained as he pointed toward all the pans.

“Let me guess,” Fizzlepop started, “the reindeer got into the leftover beans.”

“You got it,” Highstep replied, grinning.

All the elves threw their hands up in the air and laughed while leaving the area. “You know,” remarked Cater grinning. “I thought there was something familiar about that odor.”

Shrugging my shoulders, I chuckled. “Sorry. I guess my nose doesn’t always know.”

As they strolled away, I could hear Bernard tell the others, “You’d think after riding behind nine reindeer every Christmas Eve, Santa would be able to tell the difference between the smell of Malodor and a reindeer fart! Wait till Ms. Claus hears about this.”

I hope you enjoyed today’s story. I will post another one August 1st. If you have any comments or if there is something you would like me to tell you about, please feel free to leave me a comment. Until next week . . .

To read more about Malodor please check out: