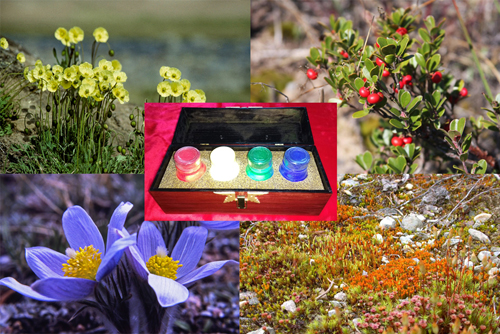 “I’m not going to tell him!” Telsa, the elf in charge of communications exclaimed.

“I don’t know why you think I should be the one to tell him,” Bernard responded, pacing back and forth. “You’re in charge of communications; besides, Queen Gwendolen called you with the news.”

“But you’re Santa’s head elf, this is your responsibility, not mine.”

Frustrated, Bernard plopped down into a chair next to Telsa’s desk and put his hands over his face as if to make the problem go away.

“Just how important is the Bladderwort plant to the Snow Fairies, anyway?” Telsa asked.

Looking intensely at her, Bernard explained, “It’s one of the main ingredients used to create all four Fairy Dusts that Santa uses to make Christmas happen.” Worried, the head elf again started pacing. “Did Gwendolen explain why there may be a shortage?” he asked.

“She said that with global warming, the bogs and wetlands, where the Bladderwort grows, are being flooded, and the plants are being destroyed.”

“I always thought the Bladderworts could grow under as well as float on the water . . .”

Before Bernard finished, Telsa interrupted him. “True, but Queen Gwendolen also told me that the Arctic ice is melting so rapidly that the plants are being washed out before they can adapt to the higher water level. In addition, waterfowl and fish that feed off the plant make it even harder to find enough.”

“Good morning Telsa and Bernard,” I said entering the communication office. “I’m expecting a message from Queen Gwendolen. Did she call yet?”

The two elves looked at each other and then at me. Then as Telsa began shuffling papers on her desk to avoid answering, Bernard began to explain, “Actually Santa, we were just talking about that. Seems Gwendolen is worried about being able to make enough Magic Dust for you.”

“I’ve been worried this might happen. It’s the Bladderwort, isn’t it?”

Relieved that Bernard told me the news, Telsa chimed in. “The fairies just finished harvesting the plants, and Queen Gwendolen said they have enough for this year, but she is not sure about next year.”

Unhappy, I shook my head and sadly muttered, “What will we do next year if the Queen is right?”

“It can’t be that complicated, Santa,” Telsa wondered aloud. “Can the elves do something to help the Snow Fairies?”

“I’ve only seen the process once, and it is very intense and precise,” I stated taking a seat next to Telsa’s desk. “You see, to make the Magic Fairy Dust the Snow Fairies collect the berries from Bearberry and Alpine Berry plants for the red; the seeds from the Arctic Poppy for the yellow; the roots of Arctic Moss for green; and the petals of the Pasque Flower for the blue, at the end of the Arctic growing season in July.”

Shaking their heads, the two elves stared at me in amazement. “We never knew that,” remarked Telsa.

“I only share the details on a need-to-know basis, and under the circumstances, you two should be made aware of the serious nature of Fairy Dust, but there is more,” I said. “After collecting what is needed, the fairies mix in an equal amount of Bladderwort to each, along with three drops of a secret oil they have. Then they brew the mixture for days until it thickens. The elves then store the mixture in shallow containers until it is solid. After that happens, they grind it into the final product ready for me to use.”

“That is complicated,” Bernard said as he stroked his chin. “Though we may not be able to make the Magic Fairy Dust like the Snow Fairies, the elves should be able to use their magical skills to figure out a possible replacement, if there is a shortage,” he added. “After all, we managed just fine until around 1500 when you first started using the red dust to get the reindeer to fly.”

“I appreciate your positive attitude, Bernard,” I replied. “However, back then I did not have to go to as many homes as I do today. Maybe we can find a way to make our work more efficient so that the four types of dust last longer.”

“YES!” Bernard exclaimed. “If we consolidate the mail sleigh runs, I believe we could save some,” he remarked as he slammed his fist into his hand. “And then maybe instead of sending the toys for just one house to your bag, we send toys for two or three houses at a time. Think of the green dust we could save,” he yelled as he gave me a high five.

“You may just have something Bernard,” I said jumping out of my chair. “It’s time to look at the problem and find a solution.”

Bernard smiled. “Santa, don’t worry; the elves will always have your back. Come on Telsa,” he announced loudly. “No time to waste. I’ll need you to send out a communication to Highstep, manager of the reindeer; Quinten, Research and Development director; Carter, mail room administrator; Treckie, overseer of tele-transportation of toys; and Houser, warehouse boss.  Slipping his arm across Telsa’s shoulders, he began explaining what was needed as the two walked into the telecommunication room.

“Elves,” I said grinning, “what would I do without them.”

Read more about the Snow Fairies:

One Reply to “Fairy Dust Shortage”