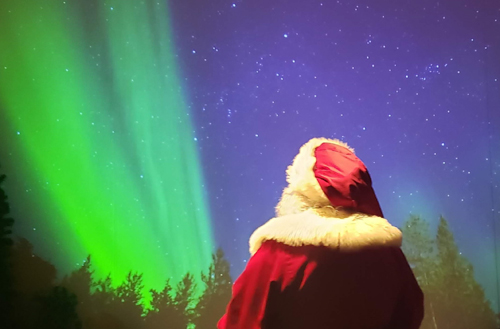 “Relax Santa, everything is in order and running smoothly,” Ms. Claus said as she straightened my fur collar. “This is exciting!”

“It’s been five years since the Elfkins and their parents have traveled from Korvatunturi Mountain in Lapland, Finland to visit our village in the North Pole,” I replied, watching Bernard direct his stage crew to make last minute improvements to the hall.

“If I remember correctly, we had a record number of applications after the last Festival. The parents take a lot of pride when their Elfkins reach the age to apply to the North Pole University,” Anya remarked while we continued to watch the activity in the hall.

Nodding in agreement, I smiled. “If we don’t show the Elfkins what we do here, how will they know if working at the North Pole is something they would like to do? I’ll need exceptional elves in the future when several of our senior elves start to retire.”

As the brightness of the lights was lowered, the doors slowly opened. Anya and I watched from behind the curtain as our special guests walked toward their seats while admiring the lifelike images of snow-covered pine and spruce along the walls. Finding their places, everyone watched as twinkling lights glimmered giving the impression of a forest on a moon-lit winter night.

“HO! HO! HO! Tervetuloa pohjoisnavalle (Welcome to the North Pole)!” I announced in Finnish as Anya and I entered, waving to our visitors.

“Look, it’s Santa and Ms. Claus,” yelled one of the Elfkins.

“We love you,” screamed a few of the young ones.

Raising her arms to calm the group, Ms. Claus called out, “Santa and I have looked forward to this day. Seeing all of your smiling faces has made us very happy.”

When the parents and their children sat down, the noise in the auditorium settled to a whisper “Teravetuloa pienet ja vanhemmat (welcome little ones and parents),” I announced. “You have traveled a long distance from Korvatunturi Mountain to the North Pole, so today is special. Since the Elfkin Festival is only held once every five years, Ms. Claus and I as well as all our elves have planned a grand weekend for everyone. You will tour the toy-making shops, and a lucky few will work side-by-side with some of the elves while they make toys. Ice-skating, sledding, and exploring the village is also on our agenda. All of you will even have a chance to taste the best hot chocolate and cookies in the world, at least I think so. Much to see and do!” I exclaimed, throwing open my arms to the cheers of the little ones.

“For now,” I continued, “we will open our celebration with singing traditional Christmas songs. Then all of you will go to your assigned rooms to settle in before dinner this evening.”

Before the room erupted, I gave my wife a quick hug and sat in my chair. When the music began, everyone took their seats and listened as Anya sang Me Kaymme Joulun Viettohon, (We’re Starting to Celebrate Christmas). Soon the joyful voices of our visitors joined in with her.

Later that evening, after all our guests had settled in and enjoyed themselves at dinner, Ms. Claus and I walked up the center aisle and took our places by the fireplace in the dining room. When I stood up to tell a story, the Elfkins squealed with delight. Leaving their parents, the little ones rushed the area where we sat.

“Careful now,” I cautioned, “there are plenty of places on the floor.”

Once everyone was silent, I began, “Most countries have their own stories about me, but do you know the one about Joulupukki (Christmas Goat/Yule Goat)?”

I watched as the Elfkins yelled with approval and began clapping.

“HO! HO! HO! Thought you would approve!” Pausing, I gazed at the little ones around me and grinned. “When the Yule Goat appeared in Lapland long ago, he was very different as he went from house to house. Do you remember what he asked for as he knocked on everyone’s door?”

I nodded. “You are right, but he never gave them out in return. In fact, if he did not receive a gift, the Yule Goat would play mean tricks on those who gave him nothing. He wasn’t very nice, was he?”

As the little ones shook their heads, I asked, “Did he stay that way?”

“No!” screamed one of the Elfkins next to me.

“Can you explain what happened?”

Though shy the little Elfkin stood up. “He changed and became kind.”

“Thank you,” I said as she sat down. “He started giving out gifts and good cheer every December riding in a sleigh, pulled by his trusted team of reindeer, like I do. But,” I said sternly, pointing to a boy who had been poking the little ones around him. “What happens if you are naughty?”

Caught by surprise, the Elfkin turned and shyly responded, “Joulupukki will leave you a lump of coal if you are bad.”

“Very good. I want you to remember that!” I exclaimed.

Several hands went up as the little ones began to ask about the nice and naughty list. After answering their questions, the lights began to dim.

“Revontulet (fox fires),” called out some of the Elfkins as they pointed at the ceiling where the radiance pulsating above created the illusion of the Northern Lights.

“Yes, Revontulet,” announced Ms. Claus as she stood up, “is my favorite story about the Aurora Borealis.”

Slowly the little ones settled down and turned their attention toward Ms. Claus. “It is said,” started Anya, “that when autumn arrives and cold nights reach the Fells (high and barren landscape) Arctic foxes appear. Long ago when Santa and I came to Lapland in the Fall, we were lucky enough to watch the fur of an Arctic fox touch the frosty ground, causing the Arctic fire to blaze which lit up the northern sky.”

Excited to hear about our adventure, the Elfkins quizzed us about the Arctic fox, what he looked like, and how he acted.

As Anya and I did our best to answer all questions, I finally put up my hands and asked for quiet. “Ms. Claus and I are impressed by your curiosity and how much you know, but since we have a big day tomorrow, getting enough sleep is important, don’t you think?” I asked.

The parents nodded quickly in agreement, but before leaving, Anya’s voice could be heard singing Tonttu (Elf). Standing next to my wife, I joined with her in song. Sweeping my eyes across the room, I noticed the joy in the faces of the elves as they sang. “Soon,” I thought, “it will be December, but tonight it feels like Christmas.”

I hope you enjoyed today’s story. I will post another one on November 15th. If you have any comments or if there is something you would like me to tell you about, please feel free to leave me a comment. Until next week . . .

To read more about Yule Goat please check out:

One Reply to “Elfkin Festival”