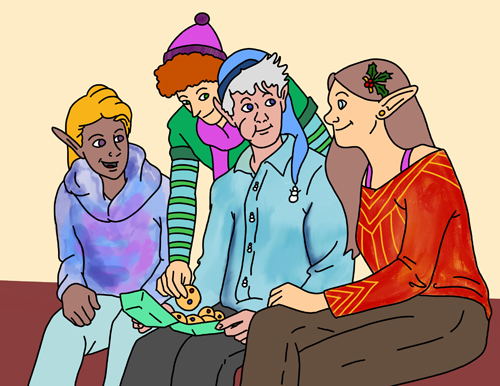 With all the workshop supervisors and department heads seated at the table in the conference room, I began the daily meeting. “I’m happy to announce that the last of the Scout Elves departed last night for their visits with their families around the world.”

“I didn’t think some of them were going to make it this year,” Patches remarked, sipping her hot cocoa.

“I know what you mean!” Wheelie exclaimed. “I didn’t think Scarfy was ever going to finish his chores in the bicycle shop.”

“Finishing their chores is just the beginning,” Traindal said raising his hand in the air. “You should try getting Skippy and Snickers to clean their room!”

As the elves continued sharing stories, Needler cried out loudly. “Birdie, why are you so particular about the Scout Elves doing their chores, cleaning their rooms, and making their beds?”

Putting her cookie back on her plate, Birdie stood up. “Ms. Claus and I think that if they are going to be with the children and helping Santa decide if the boys and girls should be on the Nice List or not,” she explained, “then they should be setting a good example for them.”

“I’m good with all that,” Clunker said leaning forward so everyone could see him. “What I don’t understand is why they all have to wear the same clothes?”

After Parlor stood up, she strutted around the room while twisting and turning like a model. As the elves began to laugh, she said, “I would never want to look like everyone else. I like being creative with my outfits. It’s who I am.”

“I could not agree more!” Patches declared in a loud voice. “Who wants to look like another elf?” Gazing at everyone around the table, she continued, “I like to distinguish myself from the rest of the elves.”

“Settle down now,” I said sternly. “There actually are several reasons why the Scout Elves dress the same. Birdie, since you are the head of the Scout Elves would you like to address this?”

“I would Santa,” Birdie replied. Standing to address everyone in the room, she began. “First, looking alike creates a sense of unity, and helps to eliminate the competition to outdo each other.”

“Hmmm,” remarked Parlor. “I guess that makes sense, but I still think you should change it up because wearing the same thing every year could get boring.”

“Though I understand your point,” Birdie answered, “remember when the Scout Elves arrive each year, we want the children to recognize them and be comfortable with them. After all, they are only going into the homes for a month or less.”

“You make some good points Birdie,” I said as she took her seat. “However, I was wondering if it wouldn’t be better if we adopted uniforms for all the elves at the North Pole.” As the elves in the room began grumbling, I continued, “And maybe each workshop and department should have their own distinct uniform so we can tell where they work.”

Finally one of the loudest elves, Sledge, yelled, “Santa, you have to be kidding. Since I take care of your sleigh and the rest of the mechanical equipment, I get dirty all the time. A uniform is wasted on me. I could never keep it clean!”

As the grumbling started sounding like a rebellion, I heard Blanch push her chair away from the table. Standing, she added, “I know what you mean. What with all the cooking and baking for everyone at the North Pole, my staff and I can never stay clean. We’d need a spotless uniform each day. That’s too costly.”

Walking toward the back of the room, I continued listening as I tried to avoid smiling.

While the elves argued about my idea, I overheard Bootsie, the cobbler, muttering, “I’d like to see Santa even try to make that idea work.”

Highstep, manager of the reindeer, nodded and then stood up. “From my experience, the majority still rules at the North Pole, so I don’t see this idea becoming reality.”

Suddenly, Bernard hollered, “QUIET!” As the elves stopped arguing, he asked, “Does anyone else hear that noise?”

Unable to keep from laughing, I exploded into a booming, “HO, HO, HO. Gotcha again!!”

All the elves immediately turned to look at me.

Slowly I shifted to face them and stopped chuckling. “I’m sorry,” I said, “but I couldn’t resist making that up.”

“You wanted to get us arguing?” Treckie asked.

“No just wanted to have a little fun with all of you.”

“How is that fun?” Carter demanded getting frustrated.

“I know everyone is getting worried about making sure Christmas goes off without any trouble as always. Yet I realize that the tension we feel can explode in the workshops and departments. So….” I explained, “I gave everyone a chance to disagree, get angry, and even yell about an idea I would never put into action. Like Highstep said, the majority rules, and most of you would never put up with mandatory uniforms.” Finished, I let out another HO, HO, HO!

Shaking his head and grinning, Highstep addressed the group. “We should have known. He does this every year about ten days before Christmas to help relieve the pressure of the season.”

“How does he manage to get us laughing and feeling good year after year?” Woody asked. “This is Santa’s version of April Fool’s Day.”

“Maybe we should call it Santa Fool’s Day,” Quinten stated.

As the laughter began to end, the elves sat back down at the table to continue the meeting. Quinten, however, remained standing, smiling. Turning to face me, he added, “Be careful Santa. When you least expect it, all of us elves will find a way to fool you!”