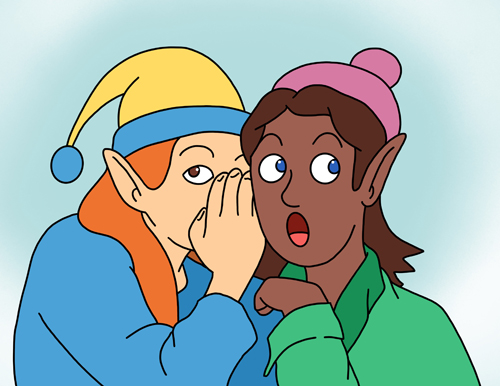 Taking a break from their kitchen duties, Doheny and Hanna sat at a table sipping hot cocoa and eating cookies. “Best time of the year!” Doheny exclaimed clapping her hands. “Finally I can try out my new Christmas cookie recipes, but it’s a shame that Santa can’t….” Realizing that she had said too much, Doheny put her hand over her mouth.

Hanna smiled waiting for her friend to finish. When she didn’t, Hanna gave her a strange look. “Come on Doheny. We have been working together for a long time.”

“Sorry Hanna,” Doheny explained, “but I promised Ms. Claus not to tell anyone.”

“Come on, I thought we were best friends. You can trust me!”

“You have to promise not to tell anyone.”

“I promise! My lips are sealed.”

Lowering her voice, Doheny leaned in to explain. “Well… you know how Santa eats a lot of cookies he gets from the children on Christmas while making his rounds. Even though he brings many of the treats back and shares them with the elves, Ms. Claus is worried. So to play it safe, she wants to limit what he eats in the weeks before Christmas.”

“I hope you are not telling me Ms. Claus is putting Santa on a diet! You know how much he dislikes diets!” Hanna exclaimed placing her hands on the side of her face.

“It’s more like a mini diet, without him knowing,” explained Doheny. “She asked me to make sugarless cookies for him from now until Christmas.”

“Your secret is my secret,” Hanna responded giving her friend a hug.

After her shift in the kitchen, Hanna walked through the courtyard and passed Rudy. As the two elves exchanged greetings, Rudy stopped. “Hanna, what’s with that big smile on your face?” he asked.

“I shouldn’t say,” Hanna began. Turning to face Rudy, she giggled and then whispered in his ear, “Santa is on a mini diet, and if he wants cookies with sugar he will have to sneak them from the kitchen.”

“OMG,” was the only thing Rudy could think to say.

“Promise you won’t tell anyone.”

Making an X on his chest, Rudy said “Cross my heart…”

As Rudy continued toward the barn, he picked up his pace with the exciting news and greeted Sledge with a “Guess what?”

Sledge slid out from under the sleigh laughing. “OK Rudy, I give. What is it?”

“You’re not going to believe this, but Santa is eating cookies he hid from last Christmas because Ms. Claus put him on a diet, and Doheny is only making sugarless cookies!”

“That’s what Hanna in the kitchen told me.”

“But does that mean we will all have to be on the same diet?” asked Sledge.

“I guess so and that will make for a lot of unhappy elves,” responded Rudy as he looked at the board that listed the needed repairs.

“Make sure you start at the top of the list. I’ll be back in a few minutes to help you,” Sledge remarked as he set his tools down on the bench and took off his work apron. “I’m going to run over to Bernard’s office to see if he is in. I won’t be long.” Sledge slipped out the door before Rudy could even respond.

When he entered Bernard’s office, Sledge closed the door and eyed the head elf suspiciously. “Did you know that Ms. Claus has placed Santa on a diet?” he asked. “Now we all have to follow the same one. No cookies till Christmas,” he wailed.

“Interesting,” remarked Bernard as he swiveled his chair around to face Sledge. “Who told you that?”

“Hmm, sounds like a rumor to me,” Bernard interrupted. “And you know how that can turn out,” he remarked rising from his chair.

Sledge relaxed and laughed. “Good point. I wonder how many elves heard the same rumor.  Since all of us look forward to Doheny’s Christmas cookies, this could get ugly quickly. We better check with Ms. Claus.”

By the time Bernard and Sledge made it to the mailroom, a large group of elves had gathered in front of Ms. Claus’s office, talking loudly among themselves. While one bold elf knocked on her door, another called out, “Open the door, Ms. Claus. We need to talk to you.”

Pushing his way to the front of the crowd, Bernard yelled, “Hey, calm down everyone, I’m sure that….”

Before he could finish, Ms. Claus opened the door and faced the elves. Examining the crowd, she shook her head. “By the look on your faces, many of you are upset.”

Not wanting to be disrespectful, the elves became quiet. Finally Rudy spoke up. “Many of us heard that you are putting Santa on a diet, and Doheny’s Christmas cookies will….”

“That’s not what we heard,” yelled a small group of elves in the back. “Nor did we,” another group responded loudly.

“Whoa,” a voice from inside the office boomed. “Sounds like an ugly rumor has been making the rounds at the North Pole!”

As I came to the door, all the elves took a large step back and in one voice exclaimed, “SANTA!”

Giving the crowd a stern look, I put my hands on my hips and began to laugh. “Ms. Claus puts me on a diet every year in the month before Christmas. Don’t you think I know that?”

Anya put her hand over her mouth trying to hide her laugh. When she regained her composure, she slipped her arm through mine. “In fact, that’s what Santa and I were just discussing,” she explained. “I did ask Doheny to make sugarless cookies until Christmas and keep that a secret. I thought all of us could limit our intake of sugar. After all, too much of a good thing isn’t always good.”

“Obviously Doheny has a hard time keeping a secret,” I remarked slipping my arm across Ms. Claus’s shoulders. “I’m guessing that each time the secret was told, the next elf told a different version of the secret.”

“I’m sure that is it. I guess it just proves the point that sharing secrets is not a good thing,” Ms. Claus stated looking over the crowd of elves.

I stroked my beard as I thought out loud, “Maybe we should stop making cookies just to show the elves that spreading rumors or telling secrets is not good for anyone.”

As the crowd of elves broke into laughter, Ms. Claus put up her hands. “OK, OK!” Once the room became quieter, she proposed a new idea. “What if I ask Doheny to make both types of cookies- ones with sugar and ones without? Then all of us can decide how we want to deal with our own sugar intake. Besides, I think all families worry about the same thing as the holidays approach. This way we can better understand how the children react to too many sweets. What do you say?”

As the elves began to cheer, they broke into “Rudolph the red-nosed reindeer had a very shiny nose…” and continued to sing as they left the mailroom.

“Well Ms. Claus,” I stated, “that was a creative solution. I like your style. Now does that mean I get to make my own decisions on what kind of cookies I want to eat?”

Making her way back into her office, Ms. Claus turned and gave me a devilish look. “Sure! After all, do you think you will be able to tell the difference? Think about that!!”