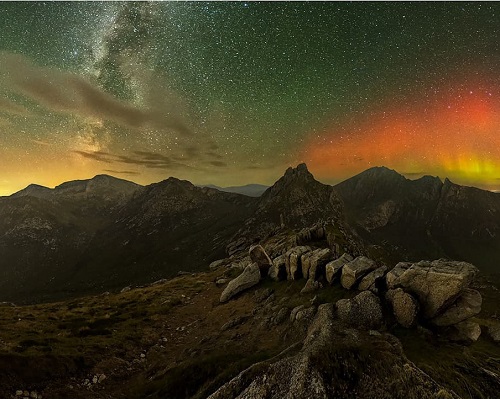 Late one evening, Anya, Bernard, and I went outside the West entrance of Christmas Village to do some stargazing. “This must be our lucky day!” Ms. Claus exclaimed as we sat on an ice ledge.

“What do you mean,” I began. Then as I looked up, I shouted, “WOW!! This does not happen very often!”

“Yeah, ordinarily we don’t get to see both the Northern Lights and the Milky Way at the same time,” a voice from behind us stated.

Startled, we turned to find our friends Polar Pete and Nippy taking a seat behind us. “Didn’t expect to see you two tonight,” I explained.

“There was no way we were going to miss this,” Nippy, Frosty the Snowman’s cousin, stated. “We figured some of the elves or you and Ms. C would not miss it either.”

“So, we decided to view it from here,” Pete, the best tracking polar bear in the Arctic, added.

“Well, it certainly is a nice surprise,” Ms. Claus said smiling at the two friends. “I’m glad to be able to enjoy this beautiful sky with you. It’s not often we get to see so many of the stars in the Milky Way at the same time as the Aurora Borealis.”

“That’s true Bernard,” Ms. Claus responded. “But what we are seeing now is the outer edge of our galaxy looking from the inside. The edge can only be seen like this when it is very dark.”

“I find the Northern Lights more interesting, especially some of the stories associated with them,” Nippy remarked, as he and Pete moved closer to us.

“What do you mean?” Ms. Claus responded.

Looking at Nippy I added, “I have also heard that when dogs barked at the lights, it was because they recognized their lost companions.”

“True, but don’t forget the beliefs of the Menominee Indians from Wisconsin,” Anya remarked. Noticing all of us looking at her, she resumed, “They thought that a race of giants, who were great fishermen and hunters, lived in the North. They imagined that the lights came from the torches they used while fishing and hunting at night.”

“What!? That can’t be real,” Polar Pete snapped. “If there were giants living up here fishing and hunting, I would have found them by now!”

I gave Pete a pat on the back and half laughing, told him, “Of course not. Those were all beliefs held by people who did not have the knowledge we have today to explain the puzzling circumstances in Nature. Nodding my head, I continued, “You know hundreds of years ago, when I first met the elves, there was another myth about the lights.”

“That was in Finland, right?” Pete asked.

“It was. I was on Korvatunturi Mountain in Lapland, and the Finns called the Northern Lights ‘Revontulet’, which translates to fox fires.”

“No one better start a fire around me!” Nippy shouted.

“Ho, Ho, Ho, I don’t think you have to worry about that Nippy. It’s a mythical creature.”

Polar Pete sighed. “Not another one.”

“Relax, Pete,” Anya began, “People often made things up in an attempt to explain why something happened. Today scientific knowledge helps to describe things that we often don’t understand.”

“That’s right,” I agreed. “Instead of the sparks from a Firefox’s fiery tail supposedly causing the Northern Lights, we now know that they are created when energized particles from the sun slam into Earth’s upper atmosphere at speeds up to 45 million mph and Earth’s magnetic field redirects the particles toward both the North and South poles.”

“I’m sure glad this Firefox is just a myth.,” responded Nippy as he nervously looked around him. “I wouldn’t want to run into one and have him melt me into water.”

“I don’t think we have anything to worry about, little buddy, since all of us know those are just stories. But I can’t help imagine what it would be like to have a bunch of giants running all over the place,” Pete insisted. “It would be like living with dinosaurs that could just crush everything in their way.”

“I’d probably have to move to the South Pole, wouldn’t I?” I asked grinning from ear to ear.

“And then you’d have a friend named Penguin Pete instead of me,” Pete said as we all laughed.

Ms. Claus put her fingers to her lips, then gently laid her head on my shoulder. Sitting in silence for the longest time, all of us gazed upward and marveled at Mother Nature’s light show. A night to remember.

I hope you enjoyed today’s story. I will post another one February 15th. If you have any comments or if there is something you would like me to tell you about, please feel free to leave me a comment. Until next week . . .