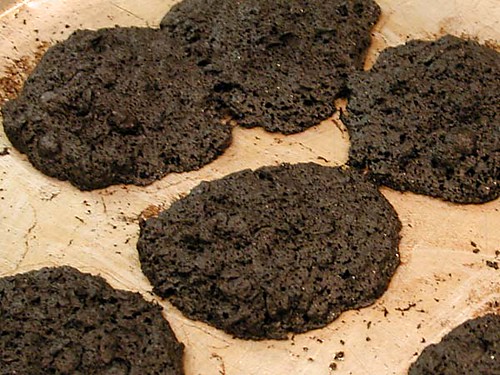 “What are we going to do,” Blanche wailed while pacing the floor. “Last week it was the electricity, and now it’s the cookie dough.” As director of the kitchen at the North Pole, she immediately called me and stepped out the door to wait.

Watching Ms. Claus and me hustle down the hallway, Blanche hurried to meet us. “Thank you, for coming so quickly,” she said shaking our hands. “You know that the worldwide delivery of our famous cookie dough begins in five days, and I’m not sure we can make that happen,” Blanche moaned, “especially after the mess this morning.”

Slipping a comforting arm around the elf’s shoulders, Ms. Claus calmly replied, “I’m sure it’s nothing that can’t be fixed.”

“I wish I could be that optimistic,” Blanche stated while opening the kitchen door.

As Ms. Claus and I entered, we noticed oddly shaped cookies on the racks by the two big stoves. Soon, our noses caught an earthy whiff. Startled, I yelled, “What happened?”

“I’m not sure,” Blanched groaned, “but when my staff retrieved the first batch from the oven, that we use to test the quality of the finished product, I knew something was wrong. Not only were the cookies mis-shaped, they also had a weird odor to them.”

“I gagged after tasting a cookie,” explained Hanna, one of the kitchen elves. Hesitating she added, “All batches have been tasted, and I hate to report that they are all bad.”

Sniffing the air, Ms. Claus and I detected a whiff of sulphur. “Malodor!!” we exclaimed in unison.

Blanche shook her head. “Not that pesky gremlin again. Didn’t he try to sabotage Christmas last year?” she asked with a disgusted look in her eyes.

“Yes, and unfortunately he has returned,” I responded. “When did you make the cookie dough?”

“Last night, Santa, but I didn’t detect an earthy stench until this morning as the test batches of cookies were baking. What are we going to do?” Blanche asked sadly. “We have so many orders to fill that the kitchen staff and I can’t afford another allotment of cookie dough to go bad.”

Spotting the intercom button by the stove, I clicked it and told Quinten, Fizzlepop, and Bernard to report to the kitchen. “Bring the scent detector with you,” I added.

Turning to face Blanche, I gave her a big hug when the three elves burst through the door. “It has to be Malodor,” Quentin announced, “especially after you asked for the scent detector.”

Hearing the elf’s statement, Blanche demanded to know what a scent detector was. “If you plan to use that contraption in my kitchen,” she warned, “it better not ruin the new cookie dough.”

“Don’t worry Blanche,” Fizzlepop said showing her the electronic device. “Once you remove all the contaminated dough and cookies and clean the kitchen, we’ll put it to work. “Hopefully we can find where Malodor has been and prevent him from returning.”

Satisfied, Blanche announced over the intercom that her entire staff had to report for a serious cleaning of the kitchen.

As a mass of elves arrived concerned, I settled everyone down and explained the situation. “Malodor is very crafty. Since he has never forgiven me for choosing elves over gremlins to become a part of my toy-making crew, he tries to find ways to sabotage our Christmas efforts. One time he damaged three assembly lines; on another occasion he destroyed most of the Christmas decorations at the North Pole. Usually, he slips into our village every ten years or more. Last year after he caused problems to my sleigh, I thought we had seen the last of him for a while. Then this,” I said and pointed to the mess. “Not only do the cookies look and smell horrible, their taste is nasty. So do your elf magic and clean up this kitchen.”

As Blanche directed her staff, Ms. Claus, Bernard, Quentin, Fizzlepop, and I headed to the dining room to discuss the problem. “I am concerned,” Ms. Claus said, taking her seat, “that Malodor thinks he can come and go as he pleases, leaving behind chaos.”

I nodded adding, “If he continues to return undetected, nothing will be safe.”

“I agree, Santa and Ms. Claus,” responded Quinten. “That’s why after last year’s mischief, I asked Bernard and Fizzlepop to join me in developing a plan of action as Santa requested. Though we are not sure if it will work, the scent detector is our best bet.”

“You see,” began Bernard, “with my knowledge of the underground passageways throughout the village, Quentin’s skill in developing a plan, and Fizzlepop’s ability to create the electrical device needed, we feel that Malodor can be stopped before entering any pathway into our town.”

Shortly before an hour had passed, Blanche appeared in the doorway and motioned us to follow her into a spotless kitchen. “Elf magic does wonders,” she remarked with pride.

“Congratulations! Even the stench is gone!” I exclaimed. “Now you and your staff can make the dough and get on with testing the cookies. Meanwhile, Ms. Claus and I will work with my team of elves and their scent detector. With a bit of elfish luck, this plan will take care of Malodor.”

After Blanche nodded approval, she instructed her elves to make more dough. Bernard then directed the five of us to a doorway that led to a flight of stairs. Descending underground, Fizzlepop turned on the scent detector. While waving the wand from left to right, we heard the ticking of the machine. “This way,” he called out and moved along a small dirt path.

Turning on our flashlights, we followed Fizzlepop and the weird ticking noise. “You see,” described Quentin, “the detector can catch Malodor’s odor, giving us a chance to find where he entered this building.”

“How is that possible?” I asked confused.

“Because his stink permeates the ground where he walks, I was able to break down the chemical make-up of his sulphur-like smell from the dirt I collected last year after he tried to destroy your sleigh, Santa,” Quentin explained. “Fizzlepop then developed this device that can follow any scent once it is put into this machine. When I contacted Bernard, the three of us figured that Malodor used the underground passageways in and out of the village since everyone knows what he looks like and can smell him.”

“Well done!” Ms. Claus exclaimed, giving each elf a hug while I followed with high fives.

“When we find where Malodor entered, an elfin lock will be used to secure that door. Then we’ll do the same to all the rest of the underground entrances,” said Bernard proudly.

“In the future, Malodor won’t stand a chance of getting inside and creating chaos,” Quentin yelled. “So, Santa and Ms. Claus just relax. We got this!”

Watching them continue down the dirt path, I whispered, “I hope so, but Malodor has out-smarted us every time we have tried to prevent him from entering the village.”

“I know that, but maybe this plan will work,” said Ms. Claus as we turned to walk back and up the stairs. “If not Santa, you will have to confront Malodor. Maybe if you make him a part of your team, he might end his reign of mischief.”

“True,” I said as we reached the top of the stairs. “Anything is possible. I just don’t see how he could possibly fit in here at the North Pole with that odor.”

As the two of us laughed, Ms. Claus and I made our way back to the kitchen and waited with her staff to test Blanche’s new batch of Christmas cookies.

I hope you enjoyed today’s story. I will post another one on December 15th. If you have any comments or if there is something you would like me to tell you about, please feel free to leave me a comment. Until next week . . .