Continuing Education for the Elves 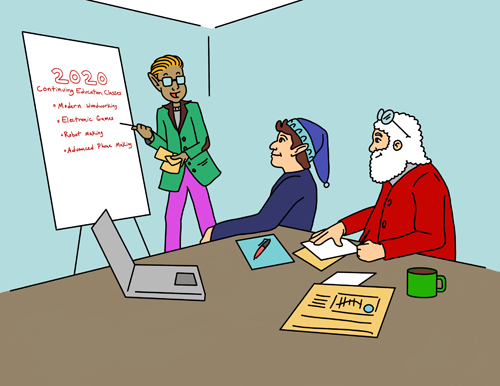 “It sure is quiet around here,” I said as I took a seat at the table in the conference room at Elf University.

Sitting at the table with a cup of hot cocoa, Bernard responded, “Many of the elves have gone on vacation while others have returned to their homeland in the Korvatunturi (kor‧va‧tun‧tu‧ri) Mountains in Finland to visit with their family and friends.”

“Enjoy it while you can,” Dean Chantilly, the elf in charge of continuing education, said as she entered the conference room with a stack of folders and papers. “They will return soon enough, and when they do, we will need to have the training classes ready for them.”

“Will the training be just on new technology?” Bernard asked.

“That is important,” Chantilly stated as she handed Bernard and me the papers she had prepared in advance. “There is still a need, however, for the basics like woodworking, stuffing animals, making trains, and creating dolls.”

“I’m fond of the basics,” I said as I poured myself a cup of cocoa. “I miss the old days, before all these electronic toys.”

“Santa, you would be bored if everything stayed the same forever.” Taking a cookie from the tray on the table, Bernard continued, “Besides learning about the technology helps you understand how the children of today think; not to mention it keeps you young.”

“You might be right, but I sometimes worry that the children put too much emphasis on the electronics, and not enough on getting outside and playing with each other.”

“I tend to agree with you Santa,” Chantilly added, “but with all the new developments in ‘artificial intelligence’ and electronic communications, children do play with each other, just in a different way.”

“Gaming with someone over a computer or phone is just not the same as sitting with them at a table or on the floor playing a game. Besides children need to go outside and enjoy the out-of-doors.”

“We have this same discussion with each generation,” Chantilly said as she stood by the white board with a marker in her hand. “What’s important is that we learn to adjust to each generation and maintain the Spirit of Christmas that has endured through all those changes.”

Bernard was quick to jump in saying, “That’s right! If we want the children to understand the meaning of Christmas, we need to relate to them on their terms . . .”

“And that means using the technologies that are meaningful and important to them,” I interrupted as I thoughtfully cupped my hands around my mug to warm them up.

“I think we all agree on that,” stated Chantilly. “Now let’s focus on getting the elves ready to make those toys.” Writing on the board she continued, “We need to train them on the following topics: robotics, computers, music streaming devices, electronic games, and these new AI, artificial intelligence, devices.”

“Is Fizzlepop, the elf in charge of electronics, working on those?” Bernard asked.

“Yes. He has been working with his elves since we ended production for this past Christmas. They have been fiddling and tinkering with the electronic toys, and after taking them all apart and putting them back together, they were able to organize the training sessions.”

“I ran into him the other day and he mentioned that there might need to be some cross training,” I stated looking at Chantilly. “What did he mean by that?”

“It seems the new technology is being combined with other toys now. For example, the FurReal Cubby is a stuffed animal, but works like a robot,” she responded. “It can blink its eyes, twitch its ears and snout, and has arms that can play peekaboo. This bear can even react to sounds and being touched. He will yawn and act sleepy when it’s time for the child to go to bed, helping put the child to sleep.”

“Being a Hot Wheels fan,” Bernard added, “I was surprised to hear that some of the cars now have a chip inside that keeps track of a car’s stats like completed challenges, how many tricks and laps it completes, and its speed. It then sends that information to a tablet or phone.”

“These are toys that will require the elves to take multiple classes,” Chantilly responded.

“I’m beginning to wonder if there is enough time for the elves to learn all of that before production can begin in time for us to make what we need for Christmas 2020.”

“That’s the last thing to worry about Santa. As you know elves do not need as much sleep as humans, and they have to keep busy with constant activity,” Bernard said reassuringly.

“The elves will be returning on April Fool’s Day, and we should have the training completed by the first of May,” Chantilly said as she put her marker on the table and began to straighten her papers. “That gives them a month to get the production lines ready for the start of the production season on June first.”

“As always it appears that you both have things well under control,” I stated as I stood to leave.

“You have nothing to worry about Santa. We have been doing this for a long time now and have the elves ever let you down?”

“Never!” I exclaimed. “I am just surprised at how eager and excited the elves are to learn new things. After hundreds of years you would think they might get tired of always learning things.”

“Oh Santa,” Chantilly said as she picked up her papers to leave. “You do the same thing. Did you ever think about all the new technologies you learn from the children? Besides let me remind you that when I took over this position at Elf University, you told me: ‘Anyone who stops learning is old. Anyone who keeps learning stays young.’ And that, I believe, is one of the secrets to how you and the elves have achieved such long lives.”