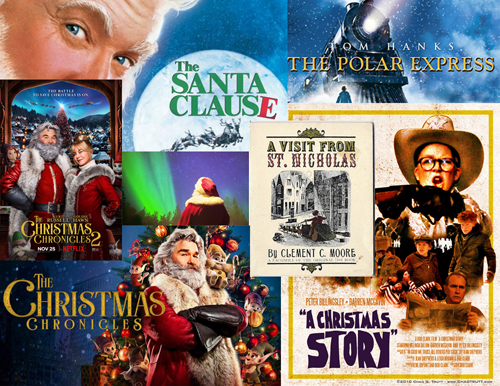 The stars twinkled brightly as Ms. Claus and I left the North Pole Theater. Once again with the Christmas season over, the movie house opened its doors nightly at the North Pole, offering a different movie each night for two weeks. As several elves passed by, heading for the fire ring in the town square, Bernard stopped us. “What did you think of Christmas Chronicles II?” he asked grinning.

“Where do the people who make Christmas movies get their ideas? Imagine me making healthy food to look and taste like cookies, cakes, or candy!” Ms. Claus exclaimed shaking her head as she brushed some of the popcorn kernels from my beard.

“I know what you mean. Why would anyone think the Northern Lights were a veil of protection for us?” Bernard said laughing. “We just enjoy them. So, Santa, what did you think?”

“Myths about me have been handed down orally for over a thousand years and told millions of times,” I remarked as the three of us headed to the bonfire.  “Yet it seems that movies have gone way beyond any of the oral stories. Still,” I continued, “it’s fun to see what movie makers create. After all, those who retell a story often exaggerate what made an impression on them, especially something they liked.”

“Gotta go,” said Bernard. “I’m the one lighting the fire tonight. See the two of you later.”

As Bernard left quickly, Anya grabbed my arm with both her hands and asked, “So the movie writers are just telling their version of a story about you that they liked?”

“You got it,” I remarked. “Sometimes they let their imaginations take over to describe the things they can’t explain, like how I get the toys into one bag in my sleigh.”

Ms. Claus nodded as we continued to make our way toward the bonfire. “You’re right. It was interesting to see how some kind of worm hole effect had been created in Christmas Chronicles I that we watched last night. I laughed as the presents were continually filling Santa’s bag from the bottom as they came from the North Pole.”

“That was very creative,” I said, “but The Polar Express we saw the first night does not even try to explain it. In that movie they show a bag of toys overflowing my sleigh and almost as tall as the tree in the town square. Truth is, if I put each toy for every good boy and girl in one bag – why that bag would be bigger than the biggest building you ever saw!”

“Has anyone got it right?” Ms. Claus wondered aloud, as we watched several elves gathered around the fire ring in the square.

“The Santa Clause depicts what actually happens, but does not explain how it happens.” Seeing a quizzical look on Anya’s face, I continued. “After delivering presents to one house, Scott Calvin, acting as Santa tells his son that he can’t make any deliveries when they arrive at the next house because the bag is empty. As he picks up the bag to show him, he discovers it is mysteriously full.”

“I don’t remember if that movie ever explained about the Green Magic Fairy Dust,” Anya said.

“It didn’t, but there would be no way for the movie writers to know about that. The four magic Fairy Dusts we get from the Snow Fairies are not known to anyone outside of our North Pole family.”

“True, but I’m a little surprised that no one has imagined some sort of fairy dust to make things happen on Christmas,” Anya remarked as she and I watched Bernard light the fire.

Making our way toward our cozy little nook by the bonfire, we settled into our favorite two-seater. Slipping my arm around her shoulders, I continued to explain my fascination with movies about Christmas. “You know,” I began, “I think the strangest thing I’ve seen was also in The Santa Clause, when my bag full of toys suddenly becomes like a balloon full of helium that hovers over the chimney so that I can be sucked down.”

Ms. Claus laid her head on my shoulder and asked, “Is that the same movie that creates a fireplace if they don’t have one?”

“It is. Ever since the poem ‘A Visit from St. Nicholas’ in 1823, all the writers of books and movies seem to be focused on me coming down a chimney from the rooftop. Of course, back then all houses had a chimney, but not these days.”

“Do the children ever ask you about how you get in if they don’t have a chimney?”

“All the time!” I exclaimed. “That’s why I keep my magic key on my belt, so I can show them. You’d think by now a writer would have thought about that.”

Sitting straight up, Anya gave me a puzzled look and asked, “Do any of these movies ever get something right?”

“There are a few things, like all the elves seeing me off at the town square in The Polar Express,” I remarked. “They got that one right, and then in Christmas Chronicles I, they talked about using the stars to find my way, which is also true. However, after 197 years, ‘A Visit from St. Nicholas’ is still the most accurate writing.”

“Why do you think that is?” Anya asked in response as she accepted two mugs of hot cocoa and a couple of large Snickerdoodles. “Thanks Blanche.”

“No problem, both of you deserve some treats by a relaxing fire.”

After Blanche left, Anya pressed me to explain about Clement Moore’s poem. “Well, he did not write it based on the myths and legends,” I said. “He actually caught me delivering presents to his house.”

“You are kidding,” laughed Anya. “Imagine that. Every child has dreams of catching you delivering presents, but Moore actually caught you in action.”

While sipping my hot cocoa, I pulled Anya closer and continued. “That’s right. The only thing inaccurate was how I got back up the chimney. Because he was behind me, Moore could not really see that I was sprinkling yellow fairy dust on myself.”

Smiling broadly, Ms. Claus stated, “Even though I look forward to watching Christmas movies and reading all the books about you, I hope no one ever finds out how you make Christmas happen.”

Laughing, I exclaimed, “SO DO I!! Thankfully tomorrow’s movie is not about me.”

“Really? A Christmas movie at the North Pole that’s not about you?” Anya said in a surprised voice.

“That’s right! It’s one of my favorite movies about ‘the holy grail of Christmas gifts’.”

“A Christmas Story?!” Ms. Claus exclaimed as she leaned back looking at me.

“That’s right, a story about the official Red Ryder, carbine action, 200-shot, range model air rifle and the boy who wanted one.”

“Now Santa, what would you actually say to that boy if he told you about the rifle,” Anya said grinning.

Both of us burst out laughing!!!