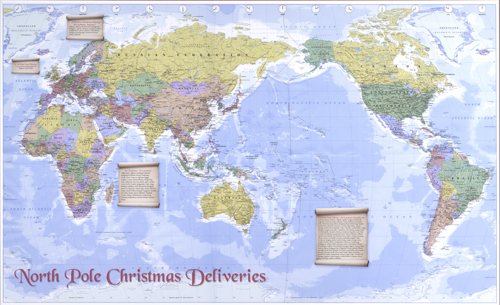 “Weller, of the three days that I deliver presents to good little boys and girls, this is the biggest! I will travel to 120 different countries tonight. What’s the weather looking like?” I asked.

“Most of your night should be as smooth as it was when you made your deliveries to Belgium and The Netherlands on December 6th,” Weller, my chief meteorologist, responded without looking up from his monitors.

“You know that once I begin my deliveries on Kiritimati, also known as Christmas Island, I only have 24 hours. Even with the Blue Magic Fairy Dust that manipulates time, it’s hard to get it all done. We need to make sure the weather does not slow me down anywhere,” I reminded Weller.

“Santa, I’ve been doing this for you for hundreds of years, so I understand how important tonight is to you.”

“I know,” I responded sheepishly. “I just get a bit anxious when I am this close to leaving.”

“I understand Santa. Let’s take a look at what you can expect on your trip this year,” Weller said as he pointed to a large screen that displayed the map of the world. “I don’t see any issues until you get to Great Britain, where I expect some heavier than usual fog, and then when you enter the United States you may have a wintry mix. Other than that, I think you will have good weather.”

Just then the door to Weller’s office opened, and Highstep stuck his head in. “Santa, the reindeer are hitched, and the elves are putting the last of the presents in your bag. When we get down there, it will be time for you to start your deliveries.”

Weller smiled and gave me a playful push toward the door. “Don’t worry Santa. The improvements Sledge made to your sleigh should help you handle the few weather issues I warned you about,” said Weller, as he gave me a thumbs up.

When I approached the center of town, where my sleigh was loaded and ready, all the elves began cheering and clapping. I gave Ms. Claus a kiss on the cheek, climbed into the sleigh, and waved to all of them as I took the reins. Then I whistled and shouted, “Now Dasher, now Dancer, now Prancer, and Vixen; on Comet, on Cupid, on Donner, and Blitzen.” With that the sleigh lifted and the reindeer guided it through the Eastern tunnel out of the village and headed to Christmas Island.

With temperatures in the 70s and very little wind, I completed the Line Islands without any issues. As I moved from East to West and back and forth from the North Pole to the South Pole, I delivered to all the islands in that part of the Pacific Ocean and now approached Auckland, New Zealand.

Finishing deliveries in New Zealand, Australia, and New Guinea I hollered to my antlered friends, “Are you ready to test one of Sledge’s improvements?” As I pushed up the lever he installed, the truss and runners folded in under the sleigh, much like the wheels of an airplane after taking off.

I could not believe how smooth and fast the sleigh moved. Bypassing the 59 countries that do not celebrate Christmas like China, India, and Turkey, I reached parts of Africa and Europe in record time.

Approaching Great Britain, I saw the fog that Weller had warned me to avoid. Knowing that it might be too thick even for Rudolph to guide me with his bright red nose, I looked at the sensors Sledge had added to the sleigh. By analyzing wind, temperature, and precipitation, I realized that I would need to alter my route.

“Dasher, Dancer,” I called out loudly while directing them to lead the sleigh towards Ireland and Iceland. “Later we’ll circle back for England, Scotland, and Wales,” I yelled. “The fog should be lifted enough by then so that Rudolph will be able to light our way.”

When I completed my stops in Great Britain, I headed to Greenland, South America, Canada and the United States. The weather was near perfect as we crossed the Atlantic Ocean, until I got to Lubec, Maine, the first stop in the United States.

With the temperature right at the freezing point, I ran into some freezing rain at Quoddy Point. My team continually looked back fearing that too much of the sleet would stick on the sleigh, making it too heavy for them to pull.

“Don’t worry about the sleigh. With the lightweight Titanium alloy Sledge used for the truss and runners, we can handle the additional weight of the ice,” I assured the reindeer. Then I clicked another switch and watched as the new windshield that Quinten had developed, curved over and around the sleigh. “I can’t feel the sleet and can see better,” I muttered.

After Maine the weather improved. With the exception of some rain and warmer than usual temperatures in Central America, it was smooth sailing to my last stop for the night, Attu Island, the last of the Aleutian Islands in Alaska.

I landed the sleigh next to the weather station, where the residents had set out plenty of oats and hay for the reindeer. “Enjoy your treats,” I told my team as I headed inside.

Once inside I was greeted by the entire crew, “Welcome Santa!”

Since the station was staffed 24 hours a day, this was the only place where the recipients were awake when I made my deliveries. “It’s always so good to see all of you after such a long night!” I exclaimed. “Thanks for the food for my team.”

“You’re most welcome,” they responded. They then parted like double doors opening while I made my way to a table set up with lots of food.

“You have no idea how much I look forward to your breakfast each year!”

“It’s the least we can do for you after all you just did for the children around the world,” one of the crew said as she pulled out the chair for me to sit.

After enjoying my feast, I rose and rubbed my extended belly. “Delicious as always,” I said as I put on my coat and headed toward the door. “Merry Christmas – Ho Ho Ho. See you in 365 more days.”

When I landed at the North Pole all the elves cheered and shouted.

Standing in my sleigh, I addressed the elves. “Thirteen days from now on January 7, I will make my final visits. Meanwhile,” I continued, “Let’s enjoy the cookies I always bring back from the boys and girls who leave them out for me.”

The cheers got even louder as the elves unpacked the bags of cookies and headed to the dining hall where we celebrated with a ‘Cookie and Milk’ party.

To read more about Santa’s Sleigh please check out: Santa’s Improved Sleigh, which was posted on March 16, 2020;

One Reply to “Christmas Deliveries”