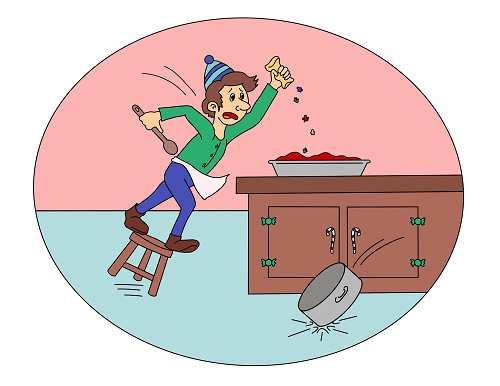 The scent of the cinnamon rolls from breakfast, floated across the hall from the dining room and distracted Bernard as he looked at today’s schedule. He wanted to be sure the elves were in the right place for their jobs.

Slowly spinning in his big green chair and staring at the ceiling, he wondered where he would put Chumley, who is a Dwarf.  He struggles doing some of the work the elves do naturally. Yesterday he had been making Hatchimals, and with short and stubby Dwarf fingers, he broke too many eggs trying to get the animals inside them.

Tapping his candy cane pen on the side of his head, he realized what Chumley could do. Hitting the call button on the intercom, “Telsa, can you have Chumley come to my office?”

After getting the message, Chumley quickly finished his breakfast and rushed over to Bernard’s office. “Telsa said you wanted to see me?” he stated, licking icing off his fingers.

“Chumley, I think I’ve come up with the perfect job for you!” Bernard put his hand on Chumley’s shoulder. “How would you like to work in the kitchen making candy canes?”

“I love candy canes. That would be so much fun!”

Walking into the kitchen, several elves had already started to cook the sugar for the candy canes, and Blanch was getting the cooling table ready for it. “Blanch,” Bernard called, “this is Chumley and I thought he could help you make candy canes today.”

“That would be great. I could use a couple extra hands today.”

Turning toward the door to leave, Bernard said, “Thanks Blanch.” Looking back at Chumley he added, “I’m counting on you to do a good job today, please do not disappoint me.”

“I won’t!” said Chumley, then looking at Blanch, “What would you like me to do?”

“First there is one big rule you must follow. You are not allowed to eat any of the candy canes while you are working.”

“No problem!” he agreed as he folded his hands over his bulging belly.

“You can add the red coloring to the mixture.” Blanch showed Chumley the cooling table, “When the sugar is cooked it will be very hot and will be poured here. I want you to take this bottle of red food coloring and add it in. Be sure you continue stirring the concoction. When it stops bubbling, Hanna will take it to the next table to shape it into canes. Any questions?”

The first few batches went well and at one point Blanch had even commented, “Chumley I am very impressed, good work.”

About the fourth batch, Chumley started to get hungry. He wanted to reach over to the other table and take one of the finished candy canes to eat, but he had promised not to do that. Cupping his chin in his hand, he remembered that he had a bag of Sour Patch Kids in his pocket.

Chumley looked around the room, making sure nobody was watching. He then reached into his pocket with his thick fingers. Fumbling around, while stirring the mixture with his other hand, he pulled the bag of candy from his pocket. Just as he got the bag open, and was about to pour some candy into his mouth, someone dropped a pot on the floor. The loud banging noise surprised  him and made him jump. His candy fell into the pot.

Before he could even blink, the Sour Patch Kids melted into the batch. He knew that he should tell Blanch what happened, but then she would tell Bernard, and he did not want that to happen. Looking down he noticed the candy did not change the color of the candy, so he decided not to say anything and hope no one would notice.

Unknown to Chumley, Berrie, as part of quality control, was tasting one candy cane from each batch. When she got to the batch with the Sour Patch Kids candy in them, she immediately snapped, “What is this? Why does this taste so sour?” Then looking around for someone to answer her, she said, “Now I’m getting a sweet taste!”

Blanch rushed over and tasted one of the candy canes herself. Her lips puckered from the sour taste. Calling the cooks over, she handed them one to taste, placed her hands on her hips, and said, “Well?”

The cooks threw their hands up in the air and backed away from the table. “We followed the recipe just like we always have!”

“Well someone did something. These do not taste the way they should!”

Chumley, knowing it was his fault, could not let someone else take the blame for his mistake. Raising his hand he confessed, “I did it. I tried to get a piece of candy from my pocket, somebody dropped a pot and it startled me….it was an accident.”

Berrie waved one of the sour patch candy canes at Blanch and said, “Chumley might be on to something here. Starts out sour and turns sweet quick. Children might like these.”

Seeing the cooks nodding their heads in agreement Blanch decided to call Santa in. Pushing the button on the intercom marked ‘Santa’s Office,’ she said, “Santa, would you come over to the kitchen? We have something to show you.”

As I entered the kitchen, the sugary scent that lingered made me grin from ear to ear. “Blanch, what did you want to show me?”

Handing me a candy cane she asked, “Would you mind tasting this for me?”

Biting off a piece I was stunned by the taste. “Wow, is this different!”

“It was sour at first, but ended with a sweet taste. I think the children might like these. You know some children do not like peppermint because it is too spicy for them. Who came up with this?”

“Chumley came up with it quite by accident.”

After Blanch told me how it happened I responded, “Well it seems to me that you may want him to experiment with other flavors for candy canes. Seems he has a knack for this.”

Laughing, Blanch agreed, “Given his unusual tastes, I agree that may be a great job for him!”

To read more about Berrie please check out: