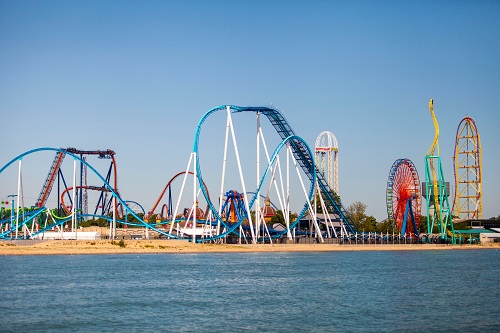 Hoping that no one would recognize the elves, Anya, or me, we entered Cedar Point Amusement Park ready for some fun.

“Where should we go first?” Needler asked looking around at all the rides.

“I’m hungry,” Clunker informed everyone. “Let’s go get something to eat.”

“We just got here,” I responded. “Besides I brought you here as a reward to have some fun, not eat. Let’s start with the tallest and fasted coaster they have.”

Pointing up to a steel blue and white coaster, Fizzlepop said, “That would be Millennium Force. It is 310 feet high and hits speeds of 93 mph.”

“But I want to go on Maverick first!” Parlor exclaimed.

Not wanting to be overlooked, Patches jumped in saying, “Steel Vengeance is where I want to go.”

“I’m not sure I am up for that,” laughed Ms. Claus

“Why don’t we break up into groups then,” I suggested. “Those who want to ride coasters will choose which ones and who to ride with; those who want to enjoy the park at a slower pace will go with Ms. Claus. Be sure to keep your Elf Communicators on so we can keep in touch during the day.”

The elves nodded and began to go in different directions. I decided to join the group heading to Maverick. As we approached the ride, Clunker spotted a Panda Express and blurted out, “I’m getting something to eat. I’ll catch up with all of you later. Before we could respond, he was off and running.

As we waited in line, I asked Parlor, “Are you excited about riding your first big coaster?”

With her smile stretching from ear to ear she responded, “You bet. I can’t wait!”

I buckled myself into the car, and turned towards Parlor to see her excited face, when we were suddenly shot up and over the top of the first hill. Coming down at a 95-degree angle, I heard Parlor’s screams. Then we went through several corkscrew and horseshoe rolls.

When we entered a dark tunnel the ride finally slowed down. As I was about to say something to Woody, who was next to me, we were shot out of the tunnel at 70 mph!

Though Maverick seemed to go on forever, it ended two and a-half minutes later. “What an experience,” I exclaimed looking at Woody. “But I’m not sure this was a good choice for Parlor’s first big coaster,” I quickly remarked noticing the scared reaction on her face.

Exiting the ride, I could see her broad smile had been replaced by a frown. “So how did you like it?”

Not wanting to admit anything, she simply said, “It was really fast and had a lot of twists.”

“You want to try another one or would you rather join the group doing non-coaster rides?” I asked.

“I think I want to join Ms. Claus,” she responded with appreciation.

On the way to meet the other group, we ran into Wheelie, who did not look happy. “How’s it going?” I asked.

“They won’t let me ride any coasters. Apparently, I’m an inch too short! Seven hundred and twenty-one years old and an inch is going to keep me from riding a roller coaster,” he responded throwing his hands up in the air.

“There is still plenty more to do than just coasters. Next time maybe you can put something in your shoes to make you appear to be taller,” I said trying to comfort Wheelie.

Seeing Ms. Claus in the distance, I waved. Walking towards us, she smiled. “How was Maverick?”

Before I could answer, Blanch and Woody exclaimed, “Awesome!!

“But I’m not sure Parlor enjoyed it,” I explained.

Nodding in agreement, she looked at Anya. “Can I go with your group?”

“Absolutely!” Looking at Blanche, Wheelie, and Sledge, she asked, “What about you guys?”

“We’d like to join you and leave the big coasters to Santa, Woody, Fizzlepop, Triandal, and Patches.”

“Now that we settled who is going with each group,” Woody remarked anxiously, “let’s go ride the Millennium Force!”

As Anya and her group moved on, I led the rest toward the Millennium Force. Running into Clunker, I hooked my arm through his and pulled him in our direction. “We are heading to the tall blue coaster; would you like to join us?”

“I’d love to, but I heard that Hugo’s has really good pizza and bread sticks, and I need to get some before they are sold out.”

Rolling my eyes, I had to laugh at Clunker. “Well I would not want to get in the way of you eating!”

As he left and made his way toward Hugo’s, the rest of the elves and I continued toward the Millennium Force and waited in line. Reaching the front, Woody, the others, and I slipped into our seats. Grabbing the seat belt to prepare for the ride, I pulled it as hard as I could, but I couldn’t get it buckled.

As I looked around and watched everyone pull down their lap bars, I heard Woody yell, “Come on Santa, you need to buckle up.”

“I’m trying!” I responded as a young man came up to assist me.

“Can you put your hands up so I can buckle you in?” he asked. After several attempts, he finally said, “I’m afraid you will not be able to ride today.”

Reluctant and embarrassed I got up, and looking at the others said, “Enjoy your ride!” and walked down the exit ramp.

Though disappointed, I waited for the others to get off the ride. When the elves walked through the exit, grinning from ear to ear, I asked, “How was it?”.

“FANTASTIC!” Woody exclaimed. “You need to lose some weight and come back so that you can ride it.”

“We’ll see,” I remarked, “but for now let’s take in as many rides as we can. We still have several hours before we have to leave.”

Later, as we exited Valravn, I was feeling hot and tired. Realizing what time it was, I messaged everyone on my Elf Communicator.

It’s getting late and the park will be closing soon. Let’s all meet by the antique cars at six o’clock

As everyone began to arrive, I noticed that everyone was showing signs of fatigue from the heat of the day, except for Patches and Fizzlepop who said, “Do we have to go? We still want to ride the Gatekeeper and the Top Thrill Dragster!”

Anya was quick to respond, “I think this heat is getting to us. How about riding Thunder Canyon to cool off? Then, I think we should stop for some ice cream after we leave.”

The elves smiled. The idea of getting wet on the raft ride through a white-water canyon got most of the group excited. As they headed off to get in line, I said “I think Fizzlepop, Blanch and I will stay dry and watch all of you get soaked.”

Observing from a deck above the white-water canyon, we waited as their raft approached. While Blanch aimed her camera, the raft spun left, allowing a waterfall to drench Woody, but since waterfalls flowed on both sides, no one remained dry.  Exiting the ride, dripping wet and smiling broadly, Parlor exclaimed, “That was the best way to end a long hot day!”

As we headed towards the park’s exit, I heard Clunker say, “The best part is yet to come.”

“How can that be?” Wheelie asked. “We’re leaving and there will not be any more rides.”

“You’re right, no more rides, but there will be ice cream!”

Anya and I laughed. “It’s always about food with him,” I stated as the small band of elves described their favorite rides while walking toward the exit.

Giving my hand a quick squeeze, Anya remarked, “True, but it’s more about them experiencing an amusement park and seeing how children and their parents enjoy rides. Who knows, maybe this will inspire some of them to create toys families can enjoy together.”

“I like your thinking Anya,” I exclaimed. “Taking toy-making to a whole new level will be a challenge, but the elves always get creative after new experiences like this.” As I slipped my arm around her shoulders and gave her a hug, we exited the park knowing that the fun of Christmas would begin soon.