I began my career as Mr. Claus in 2007 when I was asked by a friend of the family to be Santa for her associates’ Christmas Party. Even then I had the hair and beard for the position. This was so enjoyable that I began to look at being Santa for others. Two years later a friend asked me to come to his house and be Santa for his grandchildren.

After that home visit I was sold. Seeing the look on the children’s faces was amazing. From that point on I kept my longer hair and beard. As a result children who saw me tugged on mom announcing that they had just seen Santa all year round. At that point I started researching how to be the best Santa for the children and became a member of the International Brotherhood of Real Bearded Santa’s. Over time I collected all the proper accessories in order to complete the package.

In 2011, inspired by the web site Portable North Pole, I created Santa’s List. In this book I had a page for each child I visited with all the information about them, including the things they had been good at, what they needed to do better, and what they wanted for Christmas. That little addition, even if it took some extra preparation, solidified how I would interact with the children.

After all, shouldn’t Santa know all those things? Shortly thereafter, I consistently heard parents describe the actions of the children after Santa had his talk with them. Reading Christmas book or telling a “North Pole” story finished my visit and quietly I would leave as the parents distracted the children.In October 2014 I graduated from the Charles W Howard Santa Claus School, the oldest Santa School in the country. It was after attending the Charles W Howard School that I became a “Performance Based Santa,” taking all I learned in turning my visits into a Magical experience that the children, and adults, will never forget.

In addition to many home visits and corporate events you can find Cincy Santa at the Cincinnati Museum Center’s Holiday Junction, Sunday through Wednesday and select Fridays and Saturdays. On Monday mornings for members, you can see his “The Magic of Christmas” performance, where many questions about how things work on Christmas, are answered. 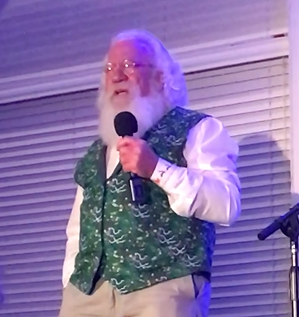