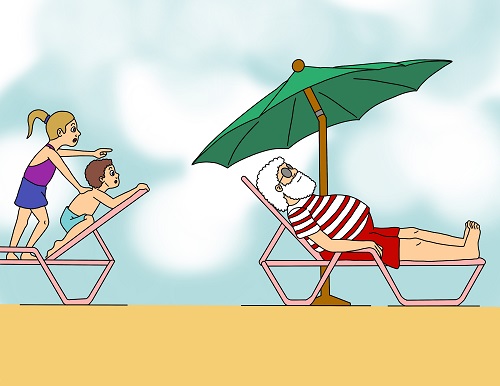 The hum of laughter dominated Elf Hall as Santa’s elves filed into the theater. Ms. Claus soon walked down the aisle behind them waving.

“So good to see all of you tonight,” she said taking her place on stage. Ms. Claus then pressed the remote. Suddenly the image of a large pool of water with people bobbing in tubes appeared.

“Are they crazy? What’s wrong with them?” yelled many of the elves.

Laughing, Ms. Claus touched the remote several times to show how much fun everyone was having. “I love to surprise you with pictures of the adventures that Santa and I have while traveling,” she began. “But, does anyone know what this is?”

Some of the elves had strange looks on their faces, but others smiled and raised their hands.

One elf stood up. “I know children take baths, but this is too big to be a bathtub. And why are they sitting in tubes half-dressed. Aren’t they cold?” Embarrassed, he sat down.

Finally, Alex, one of the Scout elves, laughed and jumped up to explain. “You have it all wrong. People swim in big pools like this one in the summer. I think this is a picture of a wave pool.”

Before the murmuring got out of hand, Ms. Claus thanked both elves and added, “Scout elves get a chance to see things when watching their children. Many of you, however, remain at the North Pole to help Santa. Alex is right; this is a wave pool. The temperature that day was 88 degrees, and everyone in the picture is cooling off.”

Clicking the remote again, Ms. Claus flashed a picture of Santa in his red trunks, red and white striped shirt, and red sun hat. Wearing sunglasses, he had smiled at the camera, while bobbing with the rest of the people in a tube. Laughter flooded the room when the elves saw the pictures of their boss.

Suddenly, Ms. Claus heard, “But what do people think of you and Santa having fun in the water?” Orin, a tall elf, stood up. Pushing his thick black-rimmed glasses into place, he waited for an explanation.

Ms. Claus flicked the remote again. Watching his skeptical face, she explained, “Notice in this picture how Santa and I are taking a break from the water and sun along with other people who are relaxing on lounge chairs under big umbrellas. Now don’t you think this would be a perfect time for people to ask Santa questions about the North Pole, the Nice and Naughty list, and the reindeer?”

Confused, Orin sadly said, “I know that we think humans want to talk to Santa, but no one is in the picture. I don’t understand.”

“Yeah,” exclaimed Bridgett, an older elf who did not like when Santa was snubbed. “They have the perfect chance to talk one-on-one with Santa, but they’re just sitting there ignoring him. That’s just plain rude. They deserve to be on the Naughty List.”

Ms. Claus hated when her pictures showed the truth about how Santa was often treated by others. “Orin and Bridget, I love your comments, but look at this one,” she remarked. The picture showed a little boy and girl in their chairs.

Suddenly the elves gasped. “They are looking up the aisle at Santa,” exclaimed Orin. Then he turned towards those who sat beside him and began to explain about the angle of the children’s heads.

Excited, Bridget stood up again, this time with a grin on her face. “You’re right Orin. You can see the little girl’s finger pointing toward Santa.”

“You are so right,” Ms. Claus exclaimed. “When I noticed them looking in our direction, I whispered, ‘You are being watched, Santa.’ He then got up, walked in their direction, and knelt on one knee next to their lounge chairs. Then, he pointed up towards me. I waved. Smiling, the boy and girl waved back.”

“Later he told me that they were Hannah and Nate. Both were excited to see Santa at Kings Island. Of course, they told him what they wanted for Christmas and promised to be good. When they left, they stopped by our chairs and said, ‘Bye Santa and Ms. Claus.’ I can tell you; it made our day.”

Orin, who was still standing, finally asked the question that no elf in the hall wanted to ask. “Why don’t all people believe in Santa?”

No one made a sound. “I’m not sure how to explain this, but I’ll try,” Ms. Claus began. “All of you understand that children know Santa when they see him. Unfortunately, many grown-ups don’t. Santa and I have talked about this change often and have no idea what causes it. Yet I can tell you that something marvelous happens to many adults a few months before Christmas, especially to parents who have children. They begin to feel the Christmas Spirit and spread it around their neighborhoods. They are kinder towards one another and more generous to those who don’t have much. They even tell stories and sing songs about Santa and Ms. Claus, the elves and reindeers, as well as the North Pole. Now mind you, not all people do this, but those who feel the Christmas Spirit make a difference.”

When the applause increased and the elves laughed and hugged one another, Ms. Claus knew that she had found the right words. Then the door to the hall opened to Santa’s wide smile as his Ho Ho Ho filled the room.

I hope you enjoyed today’s story. I will post another one on July 1st. If you have any comments or if there is something you would like me to tell you about, please feel free to leave me a comment. Until next week . . .

To read more about Santa’s Summer Adventures please check out:

One Reply to “A Water Park Adventure”