A Visit From Jack Frost 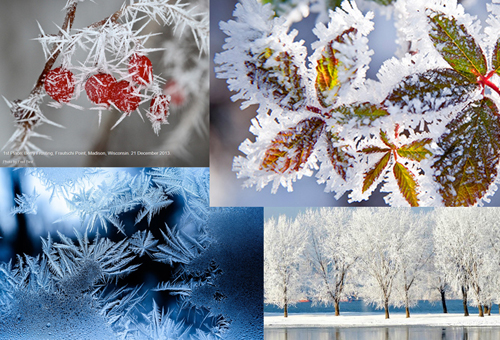 I was walking along the reindeer pastures when I felt a chill on the back of my neck. Looking around I called out, “Jack! Is that you Jack?”

“It is Santa!” Jack Frost shouted from the corner of the pasture as he made his way toward me.

“What brings you here this time of the year? Shouldn’t you be making snow down in North America, Europe, and Asia?”

Greeting me with a chilly handshake, he continued, “I know your reindeer worked hard for Christmas and spent a lot of time in warm areas, so I wanted to make sure it was cold enough for them up here at the North Pole.”

“They will appreciate that! Nothing better than some fresh snow and extra cold temperatures to make the reindeer happy,” I replied smiling.

“It’s also nice to come where my work is appreciated,” Jack responded.

“What do you mean?” I asked, giving him a strange look. “I thought the children liked having the snow and cold. Many of them did ask for sleds and ice skates for Christmas.”

“You’re right, the children love sled riding and ice skating, but I also like to think of my work as art, and I don’t think people even notice it.”

“I’m not sure I understand,” I responded. “What do you mean by art work?”

“People today are in such a hurry, that when I create ‘Frost Flowers’ on the plants, they don’t even notice.”

“That’s what I call it when I put various ice crystals on the plants, trees, or leaves, to make them look like flowers made out of ice. I used to ‘paint’ some pretty cool fern-like frost and decorative swirls on windows as well. People would always notice them when they looked outside in the morning to see if it snowed. Children would often point to the designs telling their parents what they saw. But now most houses have these new insulated windows, and my frost does not stick to them.”

“I see what you mean now,” I said as I patted him on his back.

“To make things even worse, with this climate change, my winter art does not last long enough for them to notice.”

“This climate change is having effects everywhere, and it bothers me that not everyone is taking it seriously. I have managed to find one bright spot to climate change though since we last met.”

“What bright spot did you find because I can’t imagine anything good coming from it.”

“While you were gone, climate change brought me a couple of new friends before Christmas,” I answered proudly.

“Climate change and new friends?” Jack asked with a quizzical look on his face.

Sighing a bit, I responded, “It’s quite a story, but basically, they fell asleep on an ice shelf one night near the South Pole. The shelf broke off and the two penguins floated all the way up here to the North Pole.”

“And they’re still here? The polar bears didn’t frighten them into going back?”

“Why not ask them yourself. I’m sure they are outside the southern entrance to our village about now,” I said looking at my pocket watch. 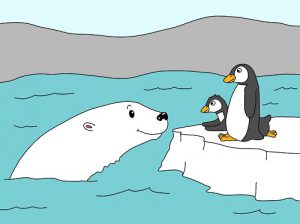 As we walked out the east tunnel, I could hear Wiggle and Waddle laughing. Looking to the left, I caught a glimpse of them playing in the snow and shouted, “Hey Wiggle, Waddle, I got someone I want you to meet.”

Looking over to see who was calling them, both penguins yelled, “Santa! Be right over.” They threw themselves down onto the snow and slid all the way over to where Jack and I were standing. “What’s up Santa?” Wiggle asked.

“I wanted you to meet another friend of mine, Jack Frost. Jack this is Wiggle and Waddle, my friends from the South Pole.”

Looking a little confused, Waddle asked, “Is there something wrong with you? You look so . . .”

“Blue?” Jack responded. “I am responsible for the frost as the climate goes from Fall to Winter, as well as snow and ice. So, my bluish color comes from my job.”

Wiggle jumped into the conversation, “We thought you were a myth. We always heard stories, but no one actually saw you.”

“There are several stories being told about how I came to be,” he began.

“I get a chuckle from the story where you and your sister were ice skating,” I said. “According to the story, you both were in the middle of the lake when the ice began to crack. You saved your sister but ended up falling into the deep lake. You sank to the bottom and were never found.”

“But yet here I am,” Jack snapped, leaping into the air.

“The tale goes on to say that about 300 years after you disappeared into the lake you came back to life as a guardian of beings who live forever,” Santa explained. “To make people believe about your existence, you frost over windows, gardens, lawns, roads, car windows, and everything else.”

“That’s an interesting story,” Jack responded as he sat on a block of ice. “Scandinavian tradition says I’m the son of Kari, the Norse god of the winds. In Finnish folklore, there is the legend of a Frost-man and Frost-woman who control weather and must keep good conditions for the reindeer to live in. Many cultures like to give a human face to things related to the seasons and weather. In Japanese folklore, for example, there are stories of a Frost Man and his brother, Mist Man, who are the keepers of frost and dew.”

Scratching his head, Wiggle asked, “So what is the true story?”

“Just like Santa,” Jack responded while pointing at me, “I choose to let everyone believe what they think and try to live up to their expectations. When Autumn shifts to Winter, you can be sure that I will bring about a frosty environment complete with some of my best frost art work. But enough about me. I’m surprised that you both are still here at the North Pole. I would think that the threat of polar bears would make you want to return home.”

“Well I admit that Waddle and I were pretty frightened when we first saw Polar Pete, but he was so nice to us. He introduced both of us to all the other polar bears and made sure we would be safe here.”

“That’s Polar Pete!” Jack exclaimed laughing. “Always looking out for his friends. You know that I spend half the year south of the equator, near Antarctica, where you are from. I could help you get back home if you’d like.”

Looking at Wiggle, to be sure he agreed, Waddle responded, “That’s nice of you to offer, but we like it here, and with all the friends we’ve met, we actually feel safer here than we did at the South Pole.”

“I don’t think the elves would like that either,” I said as I pulled my hat down further over my ears. “They have become very attached to these two, especially when they are all playing outside.”

“Sounds to me like you both have found a new home, and you certainly have made plenty of new friends. I can understand why you would want to stay.”

Giving Jack a hug, Waddle said, “And now we have another new friend in you, Jack.”

“You can never have too many friends,” Jack responded. “They can help you get through difficult times, like when you found yourself at the North Pole after a long and frightening trip. You can also learn a lot from your friends.”

“You are right about that. Both Waddle and I have learned many things from our new friends, and I’d like to think we taught them some things as well,” Wiggle added giving a wink to Santa and Jack.