A Surprise for Santa 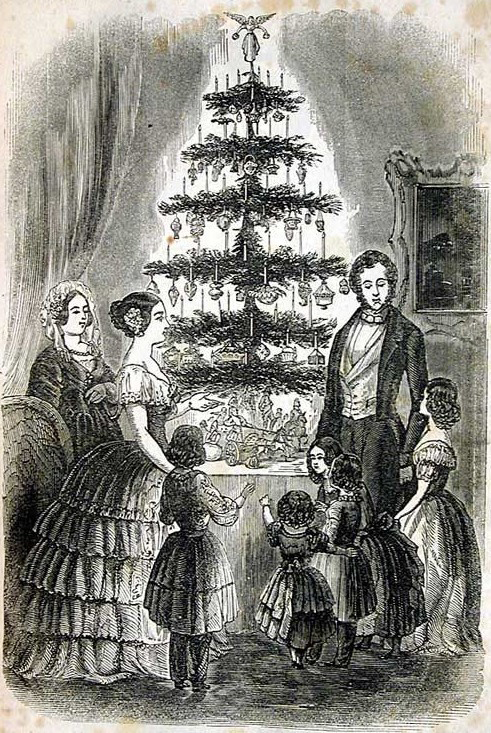 “But Ms. Claus, that would be breaking tradition, and I don’t think any elf would want to do that,” Sophia stated loudly after stomping her foot.

Nodding her head, Ms. Claus took a deep breath. “I know that, but I have a good reason for putting up the Christmas tree early.”

Just as Ms. Claus finished, her office door opened and Bernard and the department managers of the North Pole entered and took their places around the meeting table. “I guess you are wondering why I asked all of you to meet with me today?”

Unable to wait, Sophia blurted out, “She wants to put up the tree and decorate it before Christmas Eve.”

“No way!” yelled several of the elves as they stared at Ms. Claus.

“That would break tradition,” whispered many of them, “and if we did that, we might have bad luck on Christmas.”

“See,” Sophia said, “I told you that elves don’t like to break tradition.”

“Wait a minute everyone,” Bernard called out loudly. “Even though I am skeptical, I think we need to listen to her ideas. If we don’t agree, then we stay with tradition, right Ms. Claus?”

Ms. Claus nodded surprised at the passion the elves had for keeping Christmas traditions.

“You know that decorating a Christmas tree really got its start thanks to Prince Albert, husband of Queen Victoria of England in 1848. Since the Prince had experienced this custom in his home country of Germany, he shared it with his family. The British loved it and eventually so did the Americans. “Lit with candles,” she continued, “the tree wasn’t decorated early. So I think that’s why we still trim our tree in the Common Room on Christmas Eve.”

“But why do you want to change that tradition?” asked Bernard.

“It’s hard to explain this, so I’ll just be honest,” Ms. Claus stated. “Santa is so beat by the time Christmas day arrives that he can’t enjoy it as he would like. I thought maybe it would be wiser to decorate the tree earlier so that Santa and all of us could spend time in the Common Room around the tree and relax after a hard day of making toys. What do you think?”

The elves, startled by Ms. Claus’s honesty, said nothing. Finally Bernard responded, “Even I didn’t realize that Santa was so worn-out on Christmas Day, and I’m his assistant.”

Blanch then spoke up. “Bernard is right. All of the elves knew he had to be tired after delivering presents around the world, but he was always so happy that we figured he was fine.”

Clearing his throat, Sledge added, “I think I am speaking for everyone here when I say that Santa’s happiness and health is important enough to change our Christmas tree tradition.”

As the elves clapped their hands and nodded in agreement, Ms. Claus grinned. “Thank you so much. Your willingness to change means a lot to me.”

“So what’s the plan Ms. Claus?” yelled Carter as he smiled at his boss.

“Well….,” began Ms. Claus slowly. “Yesterday, everyone at the North Pole had fun decorating the outside tree, but what if we secretly decorated the one for the Common Room without Santa or anyone else knowing?”

“Do you mean,” asked Fizzlepop, director of the electronic toy department, “that only the managers in this room would do all the decorating?”

Ms. Claus laughed. “That’s right. If we started to share this plan with everyone, don’t you think Santa would find out?”

“Immediately,” Bernard answered. “But when?”

“I figure it will take you a day to plan how to do this, so how about tomorrow night?”

“Not really,” Ms. Claus explained grinning. “All of you have elf magic and tricks up your sleeves, so what’s the problem? Besides, most elves love a challenge. Since this is a surprise for Santa, I am confident that you will deliver.”

As the elves discussed what to do, Sophia jotted down notes. After the whispering and arguing ended, she gave them to Bernard who examined her report carefully. “This is a tall order,” he said, “but if you can assure us that Santa won’t wake up, we are ready to make this happen.”

As soon as he finished, the office was in an uproar with cheers and high fives.

“OK everyone, quiet down,” called out Ms. Claus. “I’ll take care of Santa and meet all of you at midnight tomorrow in the Common Room. Remember, this is our secret.”

The next day, Ms. Claus noticed that the pace of toy-making had picked up.

“You know Ms. Claus,” I said while sharing lunch with her, “if the elves continue at this pace, we’ll be done way before Christmas and have nothing to do.”

“Are you complaining?” she remarked laughing. “Maybe this is a good thing. After all, you never know when something major could go wrong and cause serious problems.”

“You make a good point,” I said finishing my lunch. “But I’ve been noticing that several of my managers are nowhere to be found.”

“Why are you worried? Your elves know what they are doing when it comes to making toys.”

“Gotta run. Lots to do,” I said giving Anya a quick kiss.

“See you later, dear,” she called out. “Nothing gets by that man,” Ms. Claus muttered. “I am glad he is too preoccupied to care.”

That night, Ms. Claus slipped down the hallway toward the Common Room and was stunned at what the elves had completed before she had arrived.

“Amazing, isn’t it?” Bernard commented as he came up to greet Ms. Claus. “Do you like it?”

“YES!! The lights are remarkable. They actually swirl in and around the tree like the Northern Lights of the Arctic Circle.”

“You can thank Fizzlepop and Quentin. They got together and with Fizzlepop’s knowledge of electronics and Quentin’s skill at research and development, the two produced a computer program that created what you see. Glad you like it. I guess the big guy is sound asleep?”

“Yes Bernard, he was tired. Besides,” I added, “there was no noise as I approached the room.”

“That was Quentin’s idea. He was able to construct a temporary sound barrier around the room so Santa and the rest of the elves would sleep undisturbed,” explained Bernard. As you can see,” he continued while sweeping his arm around the room. “We aim to please. Ready to decorate?”

As Ms. Claus nodded, she walked over towards Sophia, Carter and Doheny. “How can I help?” she asked watching as they strung berries, nuts, pine cones and tiny stars that twinkled.

“We are on a roll Ms. Claus,” Sophia remarked, “but why not decorate the mantle over the fire place. You always do a good job.”

“Thanks, I will. Besides I could never keep up with your quick hands.”

By day break, the Common Room had been transformed into a magical Christmas display. After the elves cleaned up, Quentin hit the button on his computer to dismantle the sound barrier. As he dimmed the lights so that the Christmas tree stood out, everyone cheered. Ms. Claus then built a fire in the fireplace, and together they waited for Santa to appear.

“What’s this!” I exclaimed entering the room. Overwhelmed by the beauty of the tree, I eventually looked around at the entire room and saw Ms. Claus’s smiling face as she continued to sing with the elves.

Making her way toward me, she slipped her arm through mine. “I hope you like what you see because your department elves outdid themselves.”

“Breaking tradition, aren’t we?” I asked smiling at my wife. “I wonder who put them up to this?”

Anya shrugged her shoulders. “You know Santa, sometimes breaking tradition isn’t always a bad thing,” she remarked giving me a kiss. “This year we’ll have more time to enjoy the wonder of Christmas, don’t you think?”

I nodded my head and put up my arms. As the room quieted down, I looked around at my department elves. “Your ingenious talents have made this room incredible. I think we need to take a break and enjoy this moment. Blanch, if we could…”

“One step ahead of you, Santa.” The kitchen staff then brought in scones, donuts, coffee cake, and hot chocolate. “Let’s eat,” Blanch announced.

“Have a seat Santa and Ms. Claus,” Bernard said as he directed us to our arm chairs by the fire. “Relax,” he added setting down a tray of food and drink. “We all need to slow down and enjoy the season as it approaches.”

“Couldn’t agree with you more, Bernard,” I remarked winking. “After all, ‘tis the season to be jolly.”