A Little Bit of Elf Magic 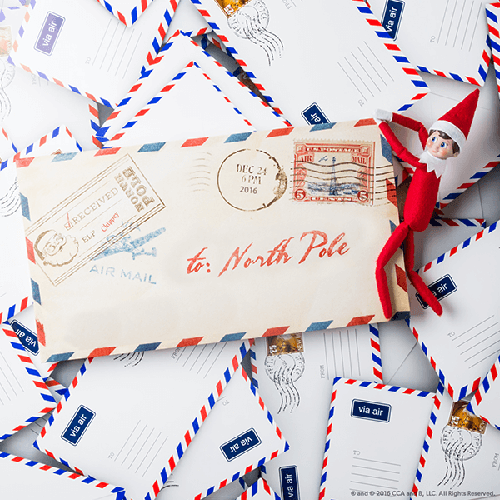 Finishing her work in the mailroom, Ms. Claus smiled as she murmured, “It amazes me how quiet this place is during the off-season. It’s noon time, and the few letters that have been emailed since the new virus procedure was put in place, have already been taken care of.”

Ms. Claus was about to leave for lunch when she remembered the letter Carter had given her. He had printed it out and written URGENT in large red letters on the top. After reading just a few sentences, Ms. Claus called Sophia, her assistant, and asked her to come over immediately.

As she finished reading the letter, she heard Sophia say, “Hi, Ms. Claus. I got here as soon as I could.” Closing the door behind her she added, “You sounded worried; is this about a sensitive letter?”

“Thanks for getting here so soon. Yes, it is and I’m concerned.” Handing the letter to Sophia, Ms. Claus explained, “It came in today. Take a minute to read, and then we can discuss it.”

“Does Santa know about this?” Sophia asked, folding the letter.

“Not yet. He’s in a meeting with Bernard, Sledge, and Quentin regarding improvements to his sleigh. I wanted to discuss the letter with you first. This young girl is sad now, yet I am not sure what to do.”

Sophia looked at Ms. Claus and finally answered, “I wonder if Santa can even find comforting words. The loss of a pet is always hard, but this pet was special.”

Ms. Claus nodded in agreement and replied, “As a service dog, Rosie went everywhere with Laurie enabling her to focus and not feel afraid of her environment. And now with the virus, she’s probably feeling even more stress with not being able to follow her usual routine.”

“She must feel terrible!” Sophia handed the letter back to Ms. Claus.

Ms. Claus nodded in agreement. “I remember reading in a letter she sent last year about how, when she went to school, her classmates and the teacher loved Rosie and how she brought a feeling of calm to the entire class. What a loss, especially since the organization Laurie’s parents used to purchase Rosie no longer exists.”

“Santa knows a lot of people,” Sophia began, “and I’m sure someone can help Laurie, but….”

As Sophia’s words trailed off, Ms. Claus’s head suddenly popped up. “You’re right Sophia! Santa does have many people who help him in his work.” Walking behind her desk, she turned on the computer and with a right mouse click pulled up a list of Santa’s contacts. Highlighting the right information, she clicked a button and the printer went into action.

Retrieving the paper from the printer, Ms. Claus explained. “Remember when Santa almost lost that little puppy he was delivering to a child for Christmas this past year?”

Sophia nodded. “Yes, but what does that have to do with Laurie’s problem?”

“Let me explain.” Picking up the stapler from her desk, she stapled the letter to the paper from the printer. “When Santa made the decision to not give pets as Christmas presents, one of the groups that helped him find homes for the dogs was the Stray Animal Adoption Program (S.A.A.P.).  This organization is in the same area as Laurie.  Certainly, they can help Laurie and her parents come up with a solution.”

“Whoa Ms. Claus, I think you are onto something. If SAAP can’t help her, I’m sure they know people who can,” Sophia remarked smiling.

“Well, the problem isn’t solved yet.” Ms. Claus wrote a quick note on the print out of the contact information. Hitting the intercom, she called for Alden to come to the mail room right away. Slipping the information inside a large tan envelope, Ms. Claus walked toward the door as she heard a familiar knock.

Ms. Claus opened the door. “Hi Alden. I always can count on your speed. Can you get this to Santa as soon as you can and emphasize that he is to read it right away and get back with me. It’s urgent.”

“Anytime I can be of assistance, I am yours Ms. Claus.” Touching his cap and bowing, Alden grinned and left.

“I like that elf,” Ms. Claus commented, shutting the door. “He is quick.” Sitting down behind her desk, she turned to Sophia and remarked, “Just think, the letter arrived this morning; we read it, discussed it, and found a possible solution. All sensitive letters should be handled that rapidly and efficiently.”

Sophia dropped her eyes and simply nodded her head.

Noticing the elf’s lack of enthusiasm, Ms. Claus realized that something was wrong and waited for her assistant to respond.

When Sophia finally answered, she chose her words carefully. “Well….. I know this problem is being taken care of swiftly, but I thought the mailroom elves and I had made major improvements in dealing with sensitive letters this past Christmas, but…. I guess we will have to do better,” she ended sadly.

Knowing that Sophia’s feelings were hurt, Ms. Claus chose her words carefully. “Please don’t feel that you and your helpers didn’t take care of the problem. “But,” she continued slowly, “sensitive letters reveal the hurt, sadness, worry, and anger that children feel. Often their parents or guardians don’t even know what children are thinking. So, when they write letters to Santa, they expect him to help. That’s why we need to identify these types of letters as soon as possible.”

“I know.” She raised her eyes to look directly at Ms. Claus. “It feels like we didn’t do a good enough job. Would we have been able to find this letter and act this fast during the busy season?”

“You went above what I expected all of you to do this past Christmas season, and I am proud of the entire mailroom staff. You and Carter did a lot to speed up the mail-sorting process. Yet, there is always room for improvement, right?”

As the sadness left Sophia’s face, she pushed her glasses back up her nose and gave a thoughtful look to Ms. Claus. Gazing around the mail room, she hesitated. “You know, by improving the sorting system last season, Carter, the mail elves, and I were able to use the postal codes on the envelopes and transfer them to the right slots more quickly. However,” she mused thoughtfully, “no one knew what was in any of the letters.”

“You’re right Sophia,” Ms. Claus replied. “As a result, all letters were treated equally because no one could tell the difference between a sensitive and a regular letter until they were read by the elves. Now how can we improve that?”

“I wonder,” answered Sophia as she walked slowly back and forth in front of Ms. Claus’s desk. “You know,” she finally continued, “postal workers around the world are scanning letters and emailing them to us as a PDF (Portable Document Format) because of the COVID-19 virus. What if Quinten, in research and development, could set something up where we could scan the letters using Optical Character Recognition (OCR),” she mused loudly.

“I don’t think I understand!”

“I’m pretty sure OCR scans the letter as text instead of an image. If I’m right, then we could use a computer to search the letters for key words that children use when they are worried about something.”

Listening to her assistant, Ms. Claus smiled knowing that Sophia was on the right track. She poured herself a cup of tea and held the pot in the air. “Would you care for some?”

After a few moments, Sophia muttered, “No thanks, I need to talk to Quinten.” With a wave of her hand, the elf left the room while continuing to talk to herself.

“Bye Sophia. Come back when you work it out OK.”

“Yes…. I will, no problem.” Shutting the door behind her, she left the room in a rush.

“With a little elf magic, Sophia and Quinten will take the impossible and make it possible,” Ms. Claus thought as she settled back into her chair. “This time the entire problem about sensitive letters will be taken care of before the Christmas season.” Stretching her legs out as she leaned back in her chair, she continued, “and the children will benefit. Elves are something else!”

To read more about the Corona Virus at the North Pole please check out: North Pole Prepares for COVID-19, which was posted on April 6, 2020;

Illustration from Elf on the Shelf