A Helicopter Ride to Holiday Junction 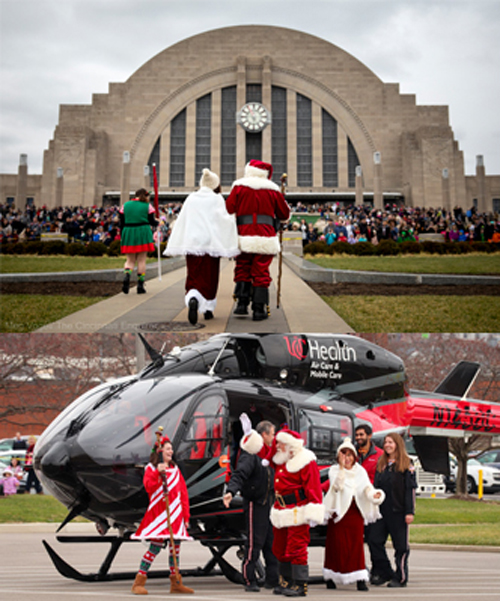 “I am so excited,” exclaimed Ms. Claus. “This is my first helicopter ride with you.”

“Though it’s not my first time, it always is fun,” answered Santa grinning from ear to ear. “What a way to get to the Cincinnati Museum Center for our special visit. I think all the children and their families will be impressed.”

Suddenly the doors leading to the U C Medical Center’s helicopter pad were pushed open as the pilot entered from the outside. “Hi, I’m James,” he said smiling. “I’ve been told that the two of you need a lift to the Museum Center, correct?”

“Well,” Ms. Claus responded with a grin. “I’m not sure how else we’ll get there.”

“After all James,” Santa interrupted chuckling, “since I had to leave my reindeer at the North Pole, we were counting on you to get us there safely. If not, lots of boys and girls will be disappointed.”

“Now we can’t let that happen, so let’s move out toward the copter and get the two of you situated.” he stated, leading the way.

As Nurse Katie and Doctor Shawn followed us, they explained some of the procedures of the hospital’s emergency helicopter. “Finally,” Nurse Katie added. “Shawn and I will be flying with you because each flight requires the presence of an emergency team no matter where James flies.”

That’s nice to know,” said Ms. Claus as she stepped on the copter’s side rail and entered through the door. Taking her seat, she added, “That makes Santa and me feel much safer.”

As all of them buckled their seat belts and put on their helmets, the pilot started the helicopter’s engine.

“Well Anya, are you ready?” I called out through the small microphone attached to my headset. “This ride will be a blast.”

“You bet Santa. Let’s get this bird in the air,” she responded while the blades began to spin.

As the copter began to rise, it shuddered until James announced, “Once the stabilizers are engaged, you can expect a smooth ride. Since this is Ms. Claus’s first flight,” he explained, “I thought I’d fly over downtown Cincinnati. Then we’ll make our way towards the museum. Enjoy the view.”

Houses, businesses, and skyscrapers soon passed below the helicopter. Making his way towards the downtown area, James pointed out the Carew Tower and the Great American Tower, the city’s tallest buildings.

As the copter flew close to the Ohio River, I spotted the Bengals football stadium and that of the Cincinnati Reds. “Whenever I fly to this area on Christmas, those two stadiums and the Suspension Bridge sitting between them are my markers for the Greater Cincinnati/Northern Kentucky area. That helps me get my bearings so that I know where to go and what to deliver,” I announced.

“I bet it looks a lot different in the daytime than at night,” Ms. Claus remarked.

“You wouldn’t believe the difference. City lights, especially in a metropolitan area, light up the sky at night. It’s magical,” I added, enjoying the memory.

Banking to the right and heading northeast, James spotted the Museum Center. “I think you have quite a lot of people waiting for you Santa and Ms. Claus,” he announced as the crowd in front of the Museum Center came into view.

Preparing to make a landing on the concrete area in front of the cascading fountain and the concrete stairs, James set the helicopter firmly on the ground. When the blades stopped spinning, Ms. Claus and I exited, waving.

“Look at the crowd of children and their families. What a sight,” I commented to Ms. Claus. “HO! HO! HO! Merry Christmas,” I called out.

“So good to see all of you,” Ms. Claus shouted, “Merry Christmas.”

Making our way up the stairs, Ms. Claus and I greeted the boys and girls with high fives, hand-shakes and hugs. Then I caught sight of one little boy smiling at me. “Those glasses make you look very handsome,” I remarked, “Merry Christmas.”

“Oh Santa,” his mom exclaimed, “Can we get a picture of you and Ms. Claus?”

Suddenly her husband stepped forward with two other children who immediately stood in front of us. “Look at the three of them, Ms. Claus. They wear glasses just like we do,” I commented smiling.

“What a good-looking group we make,” remarked Ms. Claus as the two of us bent downward and grinned at the camera.

Slowly walking up the stairs, Ms. Claus and I continued with the hand-shakes and Merry Christmases until Ms. Claus stopped and directed my attention to another boy. “What do you think of all those dinosaurs on his jacket, Santa?”

Bending towards the boy standing next to his dad, I added, “Did you know that Ms. Claus and I love dinosaurs? We especially love Dinosaur Hall at this museum, and I bet you do too.”

The boy grinned and nodded in agreement.

“Give me a big high five,” I called out.

Continuing our way through the children crowding the steps, Ms. Claus noticed a little girl with blond hair clinging to her mom’s neck. “Hi little lady,” she said. “I love your curls and your unicorn shirt. Purple is one of my favorite colors.”

“Well will you look at these two brothers,” Santa exclaimed directing Ms. Claus’s attention. “Aren’t you two handsome in those matching sweater vests?”

“Indeed they are Santa,” Ms. Claus responded turning to face the parent’s camera as the mom snapped a group shot.

Reaching the doors of the Museum Center, I pointed towards a little dark-haired girl in red velvet

“What a beautiful dress you are wearing,” Ms. Claus commented. Sliding closer, Ms. Claus gathered her skirt and pulled it close to the dress of the girl. “Notice how the shades of red almost match. We look so Christmasy, don’t you think?”

As the girl grinned, Ms. Claus straightened up and stood on one side of her while Santa walked to the other side. After snapping the picture, the dad whispered, “Thanks, you made my daughter’s day. She loves that red velvet dress.”

Waving to the girl and her father, Santa and Ms. Claus finally made it to the top of the stairs. Crossing the driveway in front of the entrance doors, the two turned and shouted, “Merry Christmas everyone.”

Entering the museum, I took Anya’s hand and asked quietly, “Are you ready for the music, singing and dancing on stage?”

Giving me a quick kiss on my check, she smiled broadly adding, “You bet I am. What a great way to begin the Christmas holiday in such a beautiful place. Let the fun begin.”