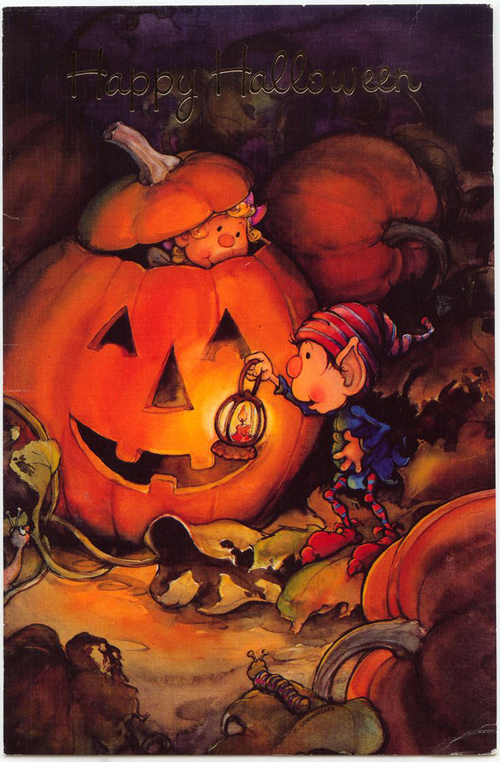 After finishing dinner, I stood up and announced, “I’m heading for the mail room to see if any letters arrived late.”

“But you’re not dressed,” Anya said as she came into the room with her hands on her hips.

“What do you mean?” I asked. When I looked at Anya, I was startled to see her dressed up as Tinkerbell from Peter Pan. “I completely forgot! Tonight is Halloween isn’t it?”

Ms. Claus smiled broadly and clapped her hands. “I’m not sure how you could forget after all the ruckus Jellybean made when she discovered this holiday two years ago. Do you have your costume?”

“You know I do. Give me a few minutes to change.” Going to our bedroom, I thought about how Birdie, my elf in charge of the Scout Elves, had sent some of them out earlier that year than expected. Jellybean immediately noticed Sarah, the child she watched, in her Halloween costume and liked it. Eventually, she told the elves about Trick or Treating after Christmas. “Now we do it at the North Pole,” I muttered, slipping on my costume.

“We need to hurry dear,” Anya called out. “The elves will soon be Trick or Treating at all the workshops and departments around the North Pole, and they expect to see us at the mail room.”

Walking out into our common room, Anya laughed and added, “You make a great Captain Hook even with your grey beard and hair. Are you ready to take on Peter Pan and Tinkerbell?”

“Remind me again who is dressing as Peter Pan?”

“Bernard, of course,” responded Anya. “Tonight the two of you get to battle it out with swords. The elves will love it!”

“Very funny,” I responded as I grabbed her hand and added, “Since you got me into this and picked the costume, maybe you can give me pointers on what to do in a sword fight.”

“We don’t have time,” she giggled, “but I think you can handle it all on your own. Let’s go”

As we made our way down the hallway to the mailroom, Anya remarked, “I’m still amazed that many countries celebrate Halloween as a fun holiday when it began as a serious festival.”

“I know what you mean,” I agreed. “It started two thousand years ago as the Celts celebrated the festival of Samhain (pronounced sow-in), which was intended to celebrate the end of the harvest season.”

“That’s right,” Anya responded slipping her arm through mine. “Didn’t the Celts believe that the boundary between the worlds of the living and the dead became blurred on that night, allowing ghosts of the dead to return to earth?”

I nodded as I tipped my captain’s hat lower over my right eye. “People back then would attend parties and share ghost stories, usually around a bonfire.”

Stopping, Ms. Claus looked at me and shifted my red coat and tightened my black belt so that the sword sat more comfortably on my left hip. “That’s better. Now tell me again, why are we wearing costumes?”

“In the beginning,” I began, “it was not for fun, but to confuse the spirits attempting to cause harm. I think I like the holiday better with the children having fun instead of hiding from spirits looking to hurt them. After all nobody, not even a ghost, should ever want to harm someone else,” I said as I slid the fake hook onto my left hand.

“You make a pretty good Captain Hook, Santa,” Ms. Claus announced as she eyed me from head to toe.

“Aye matey, and you’re a good-looking fairy,” I replied giving her a hug before we opened the door to the mailroom.

As we waited for the elves to come around, Anya emptied bags of candy into a bowl. When I tried to take a piece, she slapped my hand saying, “Santa this is for the elves not you. If you’re a good pirate, I’ll let you have a cookie later.”

I was about to reply when we heard a loud, ‘Trick or Treat,’ coming from outside our door. Glancing at each other, Ms. Claus said, “I’ve got the candy. You get the door.”

Opening it, I greeted our visitors with a big “Ho-Ho-Ho!”

An elf dressed as Spiderman responded, “Santa I think maybe ‘Arrr’ would be better than Ho-Ho-Ho.”

“Hummm, you may be right,” I said as my face turned red from embarrassment. “Would you and Wonder Woman like some candy?” When they nodded, I used my hook to snag two candy bars and placed them into their bags.

“Great job, Captain Hook!” the two elves exclaimed and then shuffled off to their next stop.

“Well, I’m impressed,” Anya remarked taking a seat by the door. “Maybe there is hope for you in the sword fight with Bernard as Peter Pan.”

“Thanks for your vote of confidence.”

Before Ms. Claus could respond, “Trick or Treat” again came booming from the doorway. Turning, I noticed SpongeBob and Patrick standing in the door carrying pumpkins for their treats. “Nice costumes,” I said, “but isn’t that you Jellybean and Syrup?”

Giggling, the two elves looked at me. “How could you tell Santa? You really can’t see our faces.”

“True, but I always recognize your voices.”

After Anya placed some candy in the pumpkins, the two elves thanked us and continued down the hall. Suddenly they turned and yelled, “Like your sword Santa. Good luck tonight!”

As quickly as the two elves had left, two more appeared. A witch and a skeleton scampered up to the door and opened their bags for candy.

“Didn’t you two forget something?” Ms. Claus asked them.

“Sorry Tinkerbell,” the witch replied as both elves yelled, “Trick or Treat!”

“We are seeing more elves in costume this year,” remarked Ms. Claus as she looked at the empty bowl. Reaching for two more bags of candy on a table inside the mail room, she heard “Trick or Treat!” come from the hall.

Dumping the candy into the bowl, I looked up as four elves, dressed in white plastic outfits wearing helmets, stood waiting for their treats.

Standing next to me, Ms. Claus asked, “And what are you supposed to be?”

“Storm Troopers from Star Wars!” they exclaimed adding, “You can call on us Santa when you face Bernard in a sword fight tonight. We’ll protect you,” they said giggling.

After an hour had passed with a steady flow of elves in costume, Ms. Claus and I noticed how the crowd had thinned down. Looking at her watch, she announced, “It’s time Santa or should I say Captain. The fight begins in 10 minutes, so let’s go.”

“Aye! Aye!” I said. After closing the door, the two of us made our way to the Common Room.

“What a crowd,” exclaimed Ms. Claus as we entered the room. “Good luck Santa!” she said giving me a little shove in the right direction.

Once Bernard, as Peter Pan, and I stood in the center of the room, the elves encircled us and sat on the floor chanting “Hook, Hook; Pan,Pan.”

With our swords touching, the two of us waited. “ARRRRRR,” I said. “Pan, you’ve met your match.”

“Not so fast, Captain. You’re not as light on your feet as I am,” challenged Bernard.

As the elves laughed at our remarks,” Birdie announced, “Is everyone ready for the sword fight between Captain Hook and Peter Pan?”

Once Birdie stepped aside, I tossed off my hat and the crowd roared their approval.

Not to be outdone, Bernard began to dance around me much to the amusement of the elves.

When our swords finally clanked together, we backed off and began to make our moves. With swords flashing from side to side, Bernard forced me to move back towards the edge of the circle. Then I shifted my foot and using what little ability I had, I pushed him back to the center of the ring.

Surprised by my quick change of pace, Bernard grinned and took aim. His flashing sword moved faster as I struggled to keep up with him. Then with one last burst of energy, I took my sword and made a thrust toward Bernard yelling, “I’ll get you Peter Pan!”

Making our final moves, we drew in closer as our swords formed a tight X. Then Bernard and I broke into laughter as we dropped them downward causing all the elves to jump up and cheer.

Unable to catch my breath, I nodded and gave Bernard a thumbs-up. Together we waved at the elves and shook hands. Leaving the center of the room, I headed towards Ms. Claus who gave me a big hug. “Congratulations, Santa. You definitely surprised all of us with your fancy moves.”

“Glad it ended when it did because I could not have kept up with Bernard much longer.”

“You know Santa,” began Anya as she slipped me a bottle of water, “at first you were unsure about letting the elves do this, but they love dressing up in their outfits. And now you had fun playing Captain Hook and getting into a sword fight with Bernard as Peter Pan. The elves enjoyed it and so did you.”

After taking a long drink of water, I took a deep breath and grinned. “You’re right Anya, I did enjoy myself,” I answered giving her a quick kiss. “I think it makes sense to give the elves a day of fun. We have 55 days until Christmas, and this was a great way to have a little excitement before the hard work of making toys for the children really begins. Now I think you promised me a cookie, right?”